Straying From the Party Line: Separate Subplots and Passive Protagonist in Bridesmaids 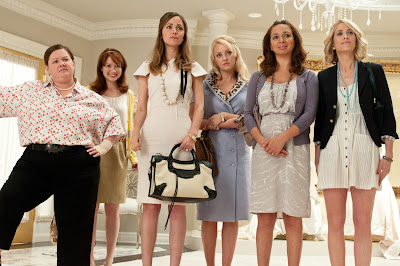 Welcome to a new regular feature! First we’ll run a movie through the Ultimate Story Checklist, and then I’ll return the following day to look at where it “broke the rules” of classical storytelling, and try to figure out whether or not that’s really a problem.

Bridesmaids is one of the best comedies of the last ten years, and it seems on first glance like a classically constructed story, but the checklist we ran yesterday shows some interesting deviations. Let’s look at two:
But let’s move on to something that seems, on first blush, like a much bigger issue:

I think there are a couple other reasons why it was so well received. I saw this movie twice; once with a group of girlfriends and the other time with my husband.

With my girlfriends, in the theatre amongst other women, we were howling with laughter, and cringing during certain obvious scenes. Then I watched it with my husband and it seemed a lot less funny and more awkward. He didn't find it all that hilarious and the only character he liked was Melissa.

As a woman, it was refreshing to come across a female protag who did not have her shit together a la Bridget Jones. Plus she was funny which always earns points. Women are tired of seeing Little Miss Perfect falling in love with Mr. Perfect. It just does not reflect the reality and especially for women in their 30's, they feel left out of the romcom genre since it is really targeted towards the 20-something market.

Sitting in that theatre, we all had been where Annie had been in various stages of her lives, no, not quite as pathetic but guaranteed, every woman has been played by a guy like John Hamm, she's worked in a sucky job like the jewelry store, her friends have succeeded in their careers and/or moved on with marriage/kids etc. So, a lot of empathy I think towards Annie as she is very much a reflection of today's woman in her 30's who feels like she's missed the marriage/career/baby train and is now trying to figure out what next?

You might be interested in the latest Slate's Culture Gabfest, if you haven't listened. They discuss the infamous Heaven's Gate and where it went wrong (along with the good). How the pacing, tangents, etc. alienate the viewer. Seemed in keeping with your checklist.

Yeah, Annie is pathetic, but her strongest redeeming quality is her steadfast friendships. I actually appreciated that her relationship with the cop didn't get entangled with the main plot points. Women see their love lives outshine their friendships all the time (especially in movies). In fact, that what Annie fears will happen when her friend gets married. She couldn't move on with the guy she liked until the end.

It's true that I always appreciate it when there's the occasional movie about women whose problems are neither solved by nor caused by men (see my write-ups of "Clockwatchers" and "Happy Go Lucky"), but of course this means that there's not much role left for the men to play. It might have been too hard to work him into the finale without making him the problem-solver-or-causer.

I haven't seen it for a very good reason. My wife and I quit watching during the 'wedding toast' scene about 30 minutes in because we couldn't get over the foul language, the story seemed to be going nowhere, the characters weren't sympathetic, and I spotted the villainess Helen (and deduced the plot) in the scene before. In other words, it had no redeeming value whatsoever.

My impression: The writers were hiding their lack of ability at writing dialogue with way too many four-letter words and not-subtle-at-all coarse sexual language. This is not normal dialogue where I live or how I was raised. It doesn't even rate as friendly trash talk IMO because that typically contains subtlety and nuance that maintains interest. This was just gratuitous trash.

One of the best comedies of the past decade? Maybe by some measures. I call such movies Vomit-Coms and I'd wager that the movie would have achieved greater popularity, wider appeal, and higher box office returns if the language had been improved to a rating below R. Foul language didn't help the movie achieve greatness, it held a great concept back.

And just to emphasize the point: My movies must have a redemptive component, a reason to continue watching. I can overlook a lot of smaller issues if that one component is present.