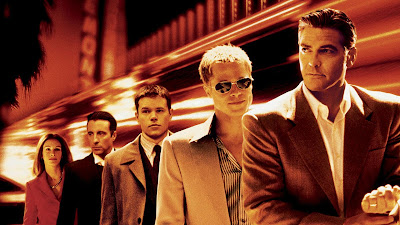 One of the most valuable and underrated skills a writer can have is the ability to write great tradecraft: witty “inside dope” dialogue about the tricks of a particular trade.

For screenwriters, this is the skill that gets you consistent adaptation/re-write work: if you’re the writer who knows how to write about a particular world, then you get the first crack at all the projects set in that world.  Aaron Sorkin can write politics and tech-speak in entertaining ways, so he’s the first go-to guy for projects like Charlie Wilson’s War and Jobs.

This is one of the big reasons why networks love to hire showrunners who learned their trade firsthand, rather than getting writing degrees.  David E. Kelly was a lawyer.  David Simon was a Baltimore crime reporter.  “The Americans” was created by an ex-CIA officer.  The assumption is that anyone can learn to write, but learning the tradecraft takes a lifetime.

Obviously, that’s not true: any writer can learn this stuff, but it takes a lot of work.  Not only do you have to learn the details of your world inside and out (read the memoirs, watch the reality shows, hang out with the actual people), but you also have to know how to package that tradecraft for an audience in an appealing way.

Screenwriter Ted Griffin was presumably never a con man, but he mastered the lingo and wrote a fantastic screenplay for the remake of Ocean’s Eleven (and then he became the go-to con/heist guy, so he was hired to adapt the novel Matchstick Men and rewrite Tower Heist).  The secret of Ocean’s Eleven is that it deftly moves back and forth amongst three different types of tradecraft-writing:
Whether you’re writing about cops, lawyers, spies, pirates, reporters, butchers, bakers, or candlestick makers, you have to learn how to write all three types of tradecraft: pleasantly incomprehensible stuff, stuff that’s fun to explain, and stuff that makes the audience feel smarter.  As you read your memoirs, look for neat little tricks that belong in each category.
Posted by Matt Bird at 8:00 PM

A bit unclear on the differences between types two and three. Right now it seems like three could just be the dialogue specific version of two. Maybe one or two more examples?

Type three is stuff that con men do that the viewer can also do at home, like lying more effectively.

In the spy world:

Type 2: "If you want to stay on the payroll, you'd better give me something, because they're running an asset-scrub next week, and if they don't think you're valuable enough, I gotta cut you off!"

Type 3: "If you want their password, don't try to guess it, just call them up and tell them that their account's been hacked and you need their password to confirm they are who they say they are."

Thanks. That helps. There seems to be an implied layer of irony in most of your type three examples. As in: the actual expert way to solve this problem is simpler than you might think. Because if the inside tip required extraordinary skill, knowledge or resources, then the average viewer couldn't really apply it.

In one of their "Writing Excuses" blogs, authors Brandon Sanderson, Dan Wells, and Howard Something or Other make a very similar point, in respect to fantasy worldbuilding.

They say that a shortcut to create verisimilitude is to describe one really big important thing in passing, and to go into great detail about one very small thing.

This creates the illusion of depth ("hey, look at this big thing that everyone knows so much about that they don't even talk about it"), and of mastery ("hey, look at this trivial little thing, the author really knows his stuff if he can describe such minor details.")