Yesterday, I implored you to simplify motivation rather than multiply it, but then I found myself advising you to make the kind of movies I hate.  Yes, your job will be the easiest if your the heroes are always motivated by personal pain and gut instinct, but that’s precisely the reason that I so many modern American movies are so bad.

The original heroes of “Star Trek” were motivated by ideas and ideals.  In the J. J. Abrams remake, it was just, “He killed my dad!”  “He killed my mom!”  “Let's team up and kill him!”  I was bitterly disappointed.

Or compare Argo to Zero Dark Thirty.  According to yesterday’s advice, Argo would be bad (he was just doing his job, didn’t have strong feeling about his Iranian opponents, and had some vague sense that helping the hostages would allow him to re-approach his wife) while ZDT would be great.  But for me, the opposite was true: Argo seemed thoughtful and complex, whereas ZDT, even if I’d been willing to ignore its politically-motivated factual inaccuracies, would still just be a brain-dead macho revenge flick.

And there have always been too many movies (For Your Eyes Only, Batman Returns) in which hero condemns another character for seeking revenge, only to then take violent revenge against his own enemies, because that's the only type of movie that Hollywood knows how to make.

This brings us right back to The Great Hypocrisy.  How can the hero defeat the villain without sinking to his level?  How does a movie stay true to its ideals and yet still deliver a viscerally satisfying climax?  Most importantly, how do you escalate your hero’s motivation without debasing it?

Let’s go back to one of our backdoor storytelling gurus, Abraham Maslow.  I think that one reason I find all of these revenge movies so deflating is that they turn Maslow’s pyramid on its head.  In retrospect, I see that it can work to add additional motivation as the story progresses, but only if you’re climbing up Maslow’s pyramid, not descending downward. 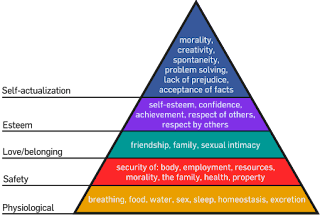 It’s far more powerful if your hero starts out seeking revenge for himself, then realizes that no, it’s better to get justice for others.  If the hero goes the other way, it feels like a moral defeat, even if it ends in personal victory.

The heroes of the Lethal Weapon movies start out seeking justice and end up seeking revenge.  The result is a temporary visceral thrill that leaves us ashamed of ourselves an hour after we’ve left the theater.  The heroes of Star Wars and How to Train Your Dragon begin by seeking revenge and end up seeking justice, which leaves the audience feeling ennobled and deeply satisfied.
Posted by Matt Bird at 6:00 PM

Labels: Character, How to Train Your Dragon, Storyteller's Rulebook, Theme

'How can the hero defeat the villain without sinking to his level? How does a movie stay true to its ideals and yet still deliver a viscerally satisfying climax? Most importantly, how do you escalate your hero’s motivation without debasing it?'

Re: The Dark Knight. Nuff said.

STAR WARS vs. the J.J. Abrahms STAR TREK is maybe the best example of this rule.

I have to disagree with your takes on the heroes of ARGO and ZERO DARK THIRTY. Maya might be as single-minded and otherwise blank as Liam Neeson in TAKEN, but that doesn't mean she's strictly out for personal revenge. She's obsessed with solving the only major problem she's ever worked on in her first and only job -- completing an intelligence jigsaw puzzle by finding the whereabouts of UBL. It's first and foremost a bureaucratic procedural. The fact that she loses a friend along the way strengthens her resolve, but it doesn't fundamentally alter her motivation.

The hero of the film ARGO actually seems to me over motivated (in the kind of pile-on way you dislike), at least compared to his real-life counterpart, who saw his mission as a problem that was too "technically sweet" not to solve. Sure, he was also, in part, motivated by patriotism and he risked his life for others, but this operation wasn't all that more or less dangerous than a dozen others throughout his long and storied career (and those are just the ones we know about). It was simply a more challenging and thrilling deception than usual. In a way, the real-life Tony Mendenz is even closer to someone like Maya, obsessed with his job, damn good at it and determined not to let his superiors scuttle his chance to do it right.

Interesting post. I'm still digesting it but you've hit on something deeply buried, those lingering wisps of dissatisfaction after watching the above movies.

I just wanted to add two points:
1) "subsequent research suggests that the hierarchical aspect of Maslow’s theory is bogus—people pursue all of these needs pretty much simultaneously.” - Chip Heath and Dan Heath" though the hierarchical aspects seem to be useful constructs here.
2) Your image is missing some layers in his theory. The full set includes: Transcendence, Self-actualization, Aesthetic, Learning, Esteem, Belonging, Security, and Physical.