How To Write Every Day, Conclusion: Is Your Goal to Keep Writing or Stop Writing? 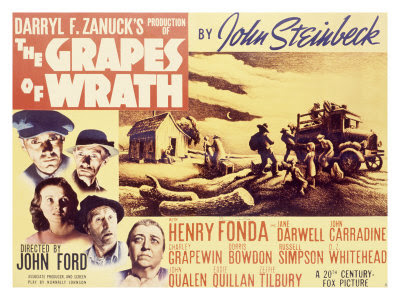 My whole generation of screenwriters was raised on tales of the ‘90s spec boom, and it twisted our heads.  Like the rubes in “The Grapes of Wrath”, we believed that, once we got to California, we could just reach out our hands and pick the fruit of wealth off the trees.  Instead, we arrived and found armed guards at the border, keeping us out.  As with the Joads, it’s hard to get over that shock.  Many of us never have.

It used to be quite common to hear life plans like this: “I’ll go out to Hollywood, work for five years, make my ‘fuck you money’, and then move to a more artsy city and do what I really want to do.”  Of course, even at the time, this plan was short-sighted and naïve, but these days, it seems painfully quixotic.

Not only does this delusion leave writers unprepared for the reality of the marketplace, but it keeps them from ever getting near that market to begin with, because it makes it very hard to move seamlessly from project to project.

If you’re trying to write that silver-bullet, million-dollar spec, then you’ll probably be unable to resist the temptation to put all your eggs in one basket.  You’ll polish that gem over and over, send it out and then start dreaming of beach houses and fast cars, instead of dreaming up your next project.  Only when you realize that nobody wants that last script will you reluctantly force yourself to start all over again.

If your goal is to one day stop working and start coasting, then that’s exactly what you’ll do, over and over again.  In the end, you’ll achieve your goal, albeit with one small change: they’ll get all the money, and all you’ll get is the ‘fuck you.’

That’s a much more ambitious fantasy, and it helps you create a much better reality in the meantime, because if you picture yourself writing in the future, then it’s far more likely that you’ll write today.
And writing everyday is the only way that you’ll ever get good enough to sell your work.
Posted by Matt Bird at 12:00 PM

Great advice. I'm planning to edit out the swears & share this (with credit to you) with the teens I tutor at 826. (No personal offense taken at the f-bombs, I just don't want angry parent phone calls!) We've been mulling over the whole knotty "Why do you write?" conundrum together and I think this'd be helpful for their young minds. Thanks!

Thanks, Julie! I usually try to stick to PG-13 language for that reason, but I make exceptions for quotes, such as this one (and I couldn't resist the call-back later on). Wouldn't you know that this would be the time that it would be a problem!

I always say that I wish 20 years ago someone had told me to quit polishing the same thing over and over again and write something new. Write a new book at least every year - if not more than that. Once I finally started to do that, success began to trickle into my life. It's a HARD lesson for most new writers, though. We're too attached to our flawed masterpiece because we can't see that it takes 10,000 hours to get good. :-)