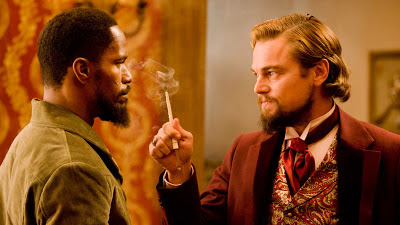 I thought Inglorious Basterds was good but very overrated, so I was quite surprised at how much better I liked this follow-up...

Tomorrow, the return of Goofus and Gallant…
Posted by Matt Bird at 2:00 PM

For me the film still goes on waaaay too long, far past the point where it ought to have resolved itself.

I also have lots of trouble buying Waltz's inability to walk away. It's well set up but also too neat. He's gone so far already, acted so much up to that moment. And he knows it's not just for him. There's nothing tragically inevitable about it like the Rathskeller shoot out in INGLORIOUS BASTERDS or the end of RESERVOIR DOGS.

There's some good character work in this film but it's not substantially better than it is in, say, JACKIE BROWN.

And the plot is seemingly more simple but it's got all sorts of bumps and hiccups that you'd normally disdain, like training montages.

Tarantino never wanted to be Godard. He's just as bright but the content of his imagination was always more about the girl and the gun than any geopolitical or philosophical ramifications thereof. I've never heard Tarantino express any interest in Godard's later work or in any qualities of his films other than their genre-bending, their bravura, their rule-breaking and their aura of cool.

Oh and I wonder if Sam Fuller wouldn't be a little bit horrified by Tarantino's freeform blending of fact and fiction when it comes the reality of slavery? Some of those awful metal masks, which I'd never seen before, were in fact based on actual designs. And the brutal treatment of the slaves we see is beyond well-documented. Yet there's no evidence than anything like Calvin Candie's "Mandingo fighting" ever occurred. Fuller, former journalist that he was, exaggerated certain things for drama's sake, but never details that would mislead like this. Whereas, for Tarantino it's all about another reference and an excuse to amp up the energy of his film -- historical reality be damned. So have you seen WHITE DOG?

Wow, another boring movie. Quentin Tarantino in my opinion has lost any sense of originality (if he ever possessed it). Should I say that the story was so predictable I knew what was going to happen when I saw the trailer? Make me interested, please.

Matteo-- I did mention in all three posts this week that these movies, as with almost every movie released this year, are way too long. I was asked to give my thoughts aside from that, so I am, but I agree, compared with better years, all of these movies would get disqualified for bloat, except for tomorrow's.

J.S.-- I can't agree about Fuller's penchant for accuracy. Movies like "Baron of Arizona" and "Park Row" are hardly scrupulous to the facts. I'm a fan of "White Dog" and I thought that this was a movie cut from the same cloth.

I agree that Tarantino invented "Mandingo fighting" for sensationalistic reasons, but it's not that much of a stretch (owners would use slaves as boxers, if not to-the-death wrestlers), but I am willing to assume that his goal was to shock us into accepting afresh the horror of slavery-- the greatest danger in a film like this is that audiences are pre-inured to the horror of the situation.

I think that Tarantino cannily pitched his film so that different audiences would perceive it in different ways. History buffs got tipped off that he'd be going off-book in the very first frame, which read "1858-- Two Years Before the Civil War". Those who knew that was wrong had some forewarning that he'd be taking other liberties (in case anyone had forgotten that he was willing to machine gun Hitler to death in the previous movie.)

The end of INGLORIOUS BASTERDS is thrilling precisely because we all know the history, we all know what's supposed to happen. The stunning surprise is that the Basterds don't know and they get to win, for once, because they're in what turns out to be an alternate history. Not the same thing at all as the apocryphal "Mandingo fighting" just because it was in an exploitation film about slavery that Tarantino wants to reference and steal some narrative juice and moral self-righteousness from. Judging the relative reality of this inclusion can't be left up the the vast majority of the audience in the same way.