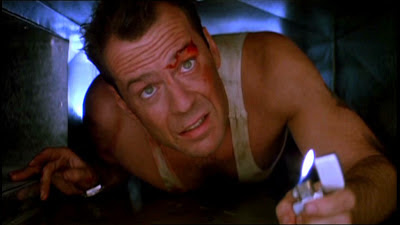 Here’s another problem with “character motivates, plot complicates” stories: since your heroes are dealing with a problems of their own making, they know too much about what they’re getting into. They’re choosing to put themselves into a potentially bad situation, which instantly opens up both motivation holes and empathy holes: Why would they do that? And why should we care about characters who don’t protect themselves?

But this is something to keep in mind for plot-driven movies as well: Heroes shouldn’t know what they’re getting into. If the hero already knows how big the problem is by page 30, then you’ll just be marking time through the second act, waiting for the finale.

Here’s the bad version of Die Hard: 30 minutes in, John McClane gets on the P.A. and announces to Hans Gruber, “My mission is to kill you, Hans!” Hans announces over the same system, “You will never get to me, John, because one of my three master henchmen will kill you first!” John then spends the next hour defeating the three henchmen, and the last half hour confronting Hans directly. We’ve all seen versions of this, and they’re terrible.

This is a problem in too many heist movies: they know what the goal is early on, spend the whole middle hour planning, and only go into action at the end. I recently watched Fast Five which suffered from this problem: the heist gang decides who they want to rob, and they know where the safe is, then they sit around waiting to do it until the end. 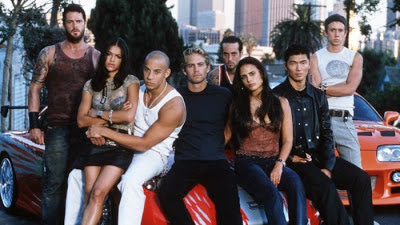 One good way to avoid this problem is to add more sources of antagonism, all of which spring from the original problem. The original Fast and the Furious wasn’t just one big mano-a-mano confrontation between Paul Walker and Vin Diesel. Diesel’s gang may have committed the original crime that launched Walker’s investigation, but by the time he’s figured that out, he’s got a lot of problems on his hands:
Nobody is sitting around waiting for an inevitable one-on-one confrontation here. One crime has led to a believable cascade of problems, which keep things surprising.  Every scene has multiple sources of conflict.

Likewise in Die Hard, the competing agendas of several groups (the cop, the crooks, a dubious rival police department, the feds, the press) keeps things lively. This takes the pressure off the main villain, who doesn’t have to provide all of the conflict in every scene, and it makes it more believable that the hero would get sucked into this ever-escalating situation, without knowing what he was getting into.
Posted by Matt Bird at 8:00 PM

Your bad version of Die Hard with Gruber's announcement about the three henchmen made me think of Scott Pilgrim vs. the World where we learn fairly early on that Scott has to defeat Ramona's seven evil ex's. The fun lies in learning who the ex's are and what type of fights will ensue. And there's so much other stuff going on in that film that keeps it interesting as well: Scott's relationship with Knives, the battle of the bands and the tension with his band mates, the mystery of G-man's identity, and of course the outcome of his romance with Ramona.

Yeah, using that bad action movie cliche to spice up what is otherwise a rom-com was great!