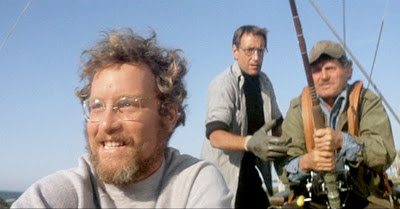 I just talked about how on “Breaking Bad”, Walt started out with a million reasons to deal meth, and it was only after most of those external reasons had fallen away that the audience was left with only one motivation: the volatile psychology of the character.

This has led me to a new rule (which builds on this previous one): In most stories, external plot developments should drive the first half, but then volatile character complications should drive the second half. The alternative is the sort of story in which character motivates for the first half and plot complicates in the second half, which can work in books, but almost never in moves and rarely on TV.

Imagine a different version of Jaws: Sheriff Brody has a midlife crisis and decides that, in order to re-connect with his masculinity, he wants to go find a shark and kill it. He befriends a marine biologist and hires a cantankerous shark-hunting boat captain, but once they’re out on the water, they discover that things get worse and worse.

It wouldn’t work. It would take a hell of a lot of monologues to convince us that Brody had enough internal motivation to do this in the first place, and even then it would be totally unbelievable that he would stick with it when the going got tough.  Instead, the first half of Jaws is all plot-driven and then the second half has no surprises at all: it’s just three men on a boat, learning to work together to do what they need to do.

Movies that are motivated by character choices almost never work. It might get you through the first half of the movie to simply have the hero say, “Hey, wouldn’t it be crazy if I…”, (See romantic comedies such as 40 Days and 40 Nights and How To Lose a Guy in 10 Dates), but in the second half, where the going gets tougher, it doesn’t make any sense for the hero to stick with it. It’s at that point, in order to keep things going, that they have to toss in last-minute plot developments.

In retrospect, this problem plagues Say Anything as well. A guy decides to go after a girl who’s out of his league, and succeeds. This is why it’s a beloved movie, but it also results in story problems. After this character-motivated beginning, the movie runs out of steam halfway through, so Crowe has no choice but to throw in an out-of-nowhere plot complication, wherein the girl’s father gets arrested. 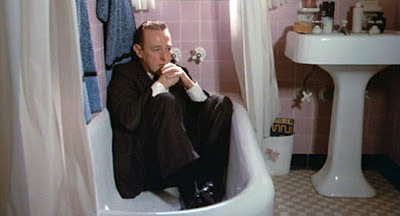 (But wait, don’t lots of movies have second-half plot twists? Actually, most of the time, those are  character twists, not plot developments. Nothing new happens to Bruce Willis in The Sixth Sense, he just overcomes his denial and accepts the truth about himself. Likewise with The Crying Game, The Usual Suspects, and Fight Club: each plot twist involves the hero finally being willing to see what he’s been foolishly blind to the whole time.)

Whether dealing with a two-hour movie or the arc of an epic like “Breaking Bad”, it’s best to wrap up the plot complications early and have the rest be driven by the character’s uniquely volatile reaction to what’s happened. Any big twists in the second half should be preferably be character reveals, not unforeseeable events. Everything in the second half should be a consequence of the first half.

This is getting long, so tomorrow we’ll examine reasons why this rule doesn’t always apply to books.
Posted by Matt Bird at 8:00 PM

Brilliant. This is really interesting. I've never considered this before, but it definitely deserves some more thought.

Oh man this is gold.

Matt, this seems to dovetail with a thought of my own: A protagonist should be externally motivated in the first half but proactive in the second. I particularly like the way you phrase this dynamic in the title, Plot Motivates, Character Complicates.