Storyteller’s Rulebook #151: If They’ve Never Done Anything Like This Before, Beware

Most screenwriters start off their careers in the grips of a fatal misconception.  They come up with a wild idea for a movie, then they think, “They’ve never made a movie like this before, so that means that this is my ticket to the top!”  But alas…

What these screenwriters don’t realize is this: For every movie that gets made, studios buy ten additional scripts that just end up sitting on their shelves. Even worse, for every script on their shelf, studios read more than a hundred additional scripts that they choose not to buy. By this point, they have seen a least one version of every possible idea. If they’ve never made anything similar to your idea, it’s not because they haven’t seen it before, it’s because they can’t find a version of that idea that works.

Hollywood doesn’t have a shortage of ideas. In fact, they have more ideas than they know what to do with. What they lack are writers who know how to execute ideas brilliantly. In fact, whenever they decide they’ve found a new “brilliant” writer, the first thing they do is tell that writer about all the old ideas they have sitting around and beg him or her to try to make them work.

A wild, bold, never-done-anything-like-this idea is actually not that easy to sell, and for good reason. Even if you do write a brilliant execution of that idea, Hollywood will still have a problem: they won’t know how to sell it. They won’t know who or what the market is. They won’t know which reviewers will respond to it.

Nevertheless, there are markets for these strange new ideas. In fact there are some buyers who are totally addicted to these scripts, and do whatever they can to get them to the screen, but they often have limited success.

Let’s look at the career of Robin Williams. He had two Oscar nominations in the late ‘80s, which gave him quite a bit of clout in the ‘90s, and he kept lending that clout to wildly original screenplays, like What Dreams May Come (a man searches for his wife in the afterlife), Being Human (four men throughout history, all named Hector, deal with existential issues), and Bicentennial Man (a robot becomes more human over the course of 200 years)…

…but none of these movies found big audiences, or got him any closer to that Oscar. Instead, he got that by making a very low-concept movie: Good Will Hunting. The concept here was simple: a working-class math genius has to see a therapist to deal with his personal issues. 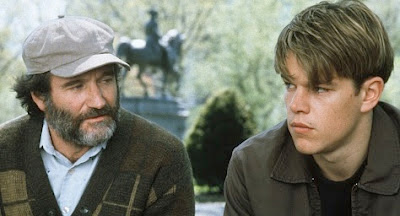 This was not a bold, fresh idea. Versions of it had already been done onscreen a dozen times. Williams’s therapist character certainly didn’t go on an unprecedented journey. Instead, he dealt with a fairly standard trauma of his own (a dead wife) and helped his patient deal with another fairly standard trauma (an abusive dad). Williams’ performance didn’t blow anybody’s mind, he just imbued his character with an exceptional amount of emotional vulnerability and honesty.

Occasionally, you do get a screenwriter that hits it out of the park: they get a wild, new idea and execute it brilliantly (for example: Eternal Sunshine of the Spotless Mind, Memento or Groundhog Day, after much tinkering), finding both popular and critical success, but these are so rare that they become the exceptions that prove the rule. You’re far more likely to have a long career if you know how to take a meat-and-potatoes idea and execute it brilliantly.

"But it's been done a hundred times before!"--as if there could be anything not done a hundred thousand times between Aristophanes and Andrew Void-Webber! As if Art is the What, not the How!”

But you, sir, just articulated WHY it's the how and not the what. Great thoughts.

I get your point, but I'm not sure you have the best examples to illustrate it. Are those Robin Williams films unsuccessful because they were too bold and original? Because they were bold ideas badly executed? Or because nobody wanted to see Robin Williams traipsing through the afterlife and chatting with Werner Herzog or being a robot with existential quandries? Might they have worked with a different actor?

I'd be more likely to argue something like "It's the execution, stupid!" Meaning that, whether your premise is bold and original or meat and potatoes, it's always about execution, about the quality of the resulting tale you spin from it. Which is why I think it's so silly when I hear someone say some project or other is "execution dependent." As if everything else weren't!

Christine Tyler might want to check out Kirby Ferguson's EVERYTHING IS A REMIX and Jonathan Lethem's Harper's essay (still free on-line) "The Ecstasy of Influence."