Storyteller's Rulebook #147: A Skewer Is Better Than A Slam 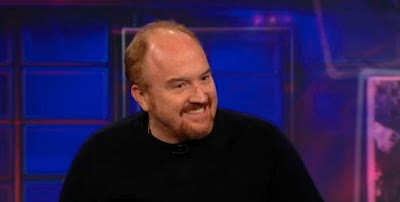 I love Louis C.K.  Except when I don’t, like when he was on “The Daily Show”  defending Daniel Tosh’s rape humor.  The problem with almost every modern comic, even my favorites like Louis and Patton Oswalt, is that they give in to bitter rage too easily.  The greatest comedians are irreverent, but never cruel.  They skewer, but they don’t slam.  This isn’t out of deference to propriety, it’s out of an understanding of what devastates people and what doesn’t.

When you skewer someone deftly, you make them think, “there’s something wrong with me.” When you simply slam them, they just think that there’s something wrong with you.  To skewer, you must find the one weak spot in their armor and slide the knife into their gut at just the right angle.  Otherwise, you’re simply whacking away at their armor with blunt force, which doesn’t make a dent.
George Carlin, who all of these guys acknowledge as the greatest stand-up of his generation, was an expert skewerer, and he proved it by sticking it to his own side just as effectively as the other. 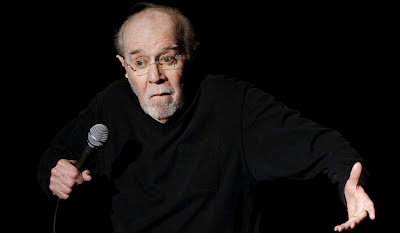 For instance, he would make fun of right-wingers for retroactively re-naming things to reshape the world in their image, then he’d turn around and do the same thing to the environmentalists on his side, pointing out that one day they realized, “Hey nobody wants to spend any money to preserve jungles and swamps”, so they invented “rainforests” and “wetlands” because that sounded better—“but hey, you’re not fooling me, those are just jungles and swamps!”

Hearing that really stuck it to me.  It’s not like I heard this and decided that we should no longer preserve rainforests and wetlands, it’s just that I thought, “Huh, I love to rail against the bad guys for twisting language, but my side does it, too, in helpful ways, so I guess I’m not really against that tactic, I’m just against the way they use it, so I should be less hypocritical in the way that I howl about this stuff.”

That’s what it feels like to be skewered: this guy has snuck his hooks into your head and he’s changing the way you think.  When Louis C.K. says that feminists never shut up, do you think that any feminist thought, “Wow, he’s right, I guess I should shut up.”?
Posted by Matt Bird at 8:00 PM

That particular DAILY SHOW appearance wasn't his finest moment. But to be fair to Louis C.K. I'm going to tell his favorite rape joke, one he tells his friends/peers -- Jerry Seinfeld, Chris Rock and Ricky Gervais -- after some prodding on the HBO special "Talking Comedy." The four guys are sitting around having a discussion about just how far you can go with a joke. And their conclusion is that there are no limits to subject matter. It's all in how it's done and whether it's funny.

Tosh's "joke" wasn't just offensive because it was about rape, but because it wasn't really a joke and didn't have anything to say. It was an unwitty unclassy lashing out at a heckler who made a legitimate (if rude) challenge to his material.

Here's Louis' joke, which cracked all of his peers up btw:

"Rape is terrible. You should never, ever rape somebody.... Unless, you know, you just want to f--k them and they won't let you."

Carlin was a great comedian. But I think it's a little unfair to reduce his output to the false ideals of balance and the kind of "both-side-ism" that's plaguing American journalism or that weakens the satire on a show like South Park. There just aren't two sides to every issue. Climate change, for instance.

Well... anybody who's seen the great documentary "The Aristocrats" know that the only way for comedians to crack each other up is to be as shocking as possible.

Nobody hates false balance more than me, and it's certainly true that for any issue the two sides are never equally correct or morally equivalent, and it degrades everybody to pretend that that's the case...

...but it certainly is true that the *people* on both sides of every issue are equally *fallible* and human, and knowing that you're on the side of the true or the good doesn't give you immunization against criticism or self-reflection. And that's what the great comics do so well.

Or, to put it another way, it's funnier and more powerful to humanize that it is to de-humanize. Louis and Patton are usually on the side of humanization, but occasionally they succumb to the spirit of the age and indulge in a little de-humanization, mostly in search of an outrageous laugh. Carlin never did.

That last comment is one of the best things I've ever read on the web, Matt.

Don't know if I'd say that "Carlin never did." Especially toward the end of his career, he became angrier and meaner in a way that alienated me somewhat at the time. Some of this later material has since begun to look quite prophetic as our financial and political system has disintegrated, but some of it is still clearly just a slam. For instance, his show opening joke "You ever notice that everyone at an anti-abortion rally is someone you would never want to fuck in the first place?"