Seeds of Greatness #1: I Love Lucy

Beginning: an occasional series where we examine pilots...

Background: Lucy had starred in a similar radio program with a different actor.  CBS wanted to transfer it over to TV, but Lucy insisted that they re-conceive the show to star her real Cuban husband.  The network was talked into it and the rest was history. 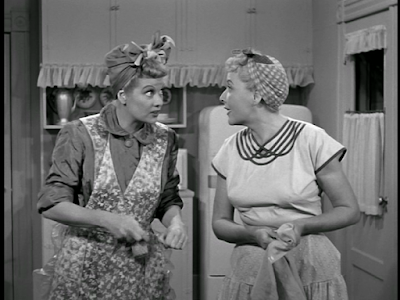 Irreconcilable Hero: Lucy is the ultimate example of the unfairly cloistered housewife: She married an exciting nightclub bandleader because she was looking for fun, but he expects her to do nothing but cook and clean, content to never leave the house.  They love each other too much to break up, but they have totally irreconcilable temperaments.

Polarized Ensemble: Lucy and Ethel are pretty similar, but Ricky and Fred very much are mirror opposites: the loving newlywed and the bitter henpecked grouch.  Compare this to the rejected pilot without Fred, where Ricky comes off as too much of a jerk.  By splitting the character in two, we get to admire Ricky, while still getting to hear Fred’s complaints, suspecting that Ricky secretly feels the same way.

Point of View: Each week, we start with Lucy getting frustrated, then follow her daffy attempts to alleviate her frustration.

Pilot Title: “The Girls Want to Go to a Nightclub”
First Aired: October 15th, 1951
Type of Pilot: Center Cut, but it’s not so much a typical episode as an archetypical episode.  Few episodes would state the show’s central irony so explicitly.

The Storylines: We start out with two, but they interact from the third scene on, so it’s really just one.
Statement of Theme: “Ever since I said ‘I do’ there are so many things we don’t.”
Twist: none

Why We Fall in Love with Lucy:
Does The Pilot Predict the Greatness of the Show?: Yes.  It’s hysterically funny and the characters are fully formed.

What Followed: Six wildly-popular regular seasons followed by three more years of occasional specials.  The day after the last episode wrapped, the real-life Lucy and Dezi filed for divorce.

How Available Is It?: Every episode is on DVD, four to a disk.  The first disk also has the original, rejected pilot.
Posted by Matt Bird at 2:16 PM

How funny that I mentioned "I Love Lucy" (in a very different way) in a post yesterday as well!

Hi Monica, thanks for pointing me back to your blog Educating Alice, which is always so well written.

It's even more ironic, because one of the reasons I ran this Lucy piece was because I couldn't decide yet what movie should have won Best Picture in 1936 (my usual Sunday feature), and guess what one of the leading candidates is?