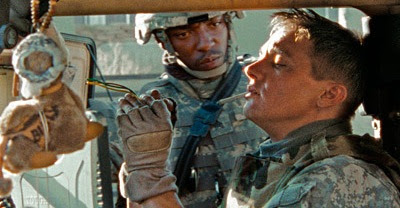 Okay, to conclude this series the notes I most often give to first drafts, let’s look at some dialogue notes:
Posted by Matt Bird at 6:30 PM

More good stuff today, Matt. Though I do have questions about some of the specific points.

I'm not sure that "Nobody would say that" is always or ever a useful criticism unless what you mean is more like "Your character in this specific world wouldn't say that." Otherwise, there goes JUNO or any David Mamet piece -- which is especially weird as his writing could almost described as hyperrealistic poetry -- and many other styles of dialogue writing.

I also have to disagree about your HURT LOCKER example. I don't think it's that bad or that out of line for the Hawkesian world of that film. Maybe just cut that final line by Renner ("Like I said..."). Or rewrite the exchange slightly "Never seen shrapnel like this."/"My wedding ring. It got me right through the heart."

What about dialogue in procedurals? Isn't it by necessity bound to be more plotty?

What about the rare films that successfully conceive of their exposition almost as action itself (TINKER TAILOR, ALL THE PRESIDENT'S MEN and to an extent, INCEPTION)? David Bordwell has done some pretty interesting work on the counter intuitive choice to tell instead of showing in this blog entry and others:

Finally, I'd caution that interrupting too can become a cliche if you're not careful about how you do it.

Forgot to say that two dialogue notes I've often given out are: 1) Do one whole pass for certain main character(s) who speak very idiosyncratically to ensure that they are always speaking in their unique voice and 2) Do one special pass for the world-appropriateness of your dialogue (If it's set completely or partly in foreign countries, for foreign words and speech rhythms; If it's a period piece for old-timeyness).

You're right, of course, I should say that "this character wouldn't say that", which would certainly be the case with the "Hurt Locker" guys, who are always in a pissing contest. I'm reminded of a book of silly network notes that came out twenty years ago. It's title came from a note that a "My Favorite Martian" writer got from a network executive: "A Martian Wouldn't Say That"