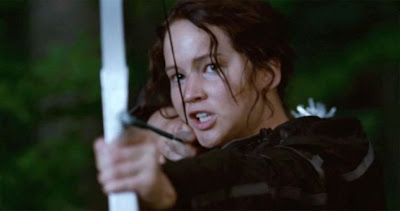 When I saw The Hunger Games in hipster-filled Brooklyn this weekend, there were several moments where the boisterous crowd giggled, but none moreso than the cave scene after Katniss comes back with the salve.  She rubs it on the Peeta’s leg, just off-screen, and he says that it feels good.  The crowd couldn’t help themselves and started tittering.

But this is craaaaazy.  We have shot after shot in this movie of teens ruthlessly snapping each other’s necks.  Our heroine stings one teen to death with a swarm of poisonous insects, kills another with an arrow to the chest, and then feeds the last one to a pack of dogs (don’t worry, she gives him a mercy killing after the first few bites), all without a smidgin of reluctance or remorse.

Why do we enjoy seeing all this killing?  Well, of course, we pretend that we don’t.  We pretend that we disapprove, and the more graphic the killings are, the more we congratulate the moviemakers for having the courage to show how horrific and wrong this situation is.  Hmm... Really?

Yesterday, my goal was to criticize The Hunger Games, but not today.  I myself, after all, have written plenty of thriller/horror/disaster stories, and I would love to write something as successful and resonant (at least for the moment) as this series.

But I also know that I need to be clear-eyed about my motives for doing so, and why the audience would enjoy it.  As a writer, I have to admit to myself that I’m not being “courageous” by showing unapologetic brutality, just the opposite: I’m indulging my own death-urge, and I’m hoping to satiate the death-urge of my audience.
Posted by Matt Bird at 6:30 PM

Well, Sigmund Bird, I sort of agree. I think you are right about the needs that rehearsing death and vicarious killing fulfills in certain genre narratives.

But I'm not sure that THE HUNGER GAMES has anything to do with disaster movies, which always struck me as being about more leadership, authority and community in a moment of extreme crisis.

And I think the elephant in the room of this post is just why THE HUNGER GAMES with its rampant bloodthirsty violence and sublimated puritanical attitude toward sex is so fundamentally appealing to Americans. Europe, where Freud first imagined both the sex and death drives, seems to have a much saner and more realistic attitude toward sex in everyday life and on-screen, even among adolescents. Maybe it's because the civilization over there is older, or they lived through more real bloodshed on their own soil or because they banished all their religious extremists over here.

Oh, it's definitely an American thing. Americans never seem to figure out that our love of death (at home and abroad) is so intimately tied to our hatred of sex.

Having not seen the film, and with no plans to, I can only reflect on what seemed to be the intent of the author through the books - the Capitol was supposed to represent a frenzied hedonism and sexuality and the sort of frothiness of life which was drummed out of the Districts. I can't say that I am comfortable with this as a film because of the HUGE amount of violence, but I'd be equally uncomfortable with a huge amount of sex - teen sex or otherwise. (There's a whole gatekeeper's conundrum inherent in this anyway, but in the book, when Katniss finally CAN relate to Peeta sexually, she struggles still. I think that's significant, but it's unlikely such a subtlety will make it to film.)

I think I am one of those people who is on the friges of whatever Venn diagram is used in determining target audiences.

I don't think I'm pretending a disgust with either violence or sex. We want to be entertained, as a species, and because violent/death urge films are what someone has perceived is entertaining, it is what is available, and it is what is consumed by most consumers.

At the risk of sounding like a buttoned-down, über-conservative, I do agree that we should look at the motives for our stories - as publishing companies chomp at the bit for "the next Hunger Games," I'm afraid that dystopia violence scenario will be played out over and over - because, after all, we've already proved that life will have no value in the future, so let's just go with tons of fatalities and move forward... right?