How to Create a TV Show, Part 11: Create a Long-Lasting, Irreconcilable Hero 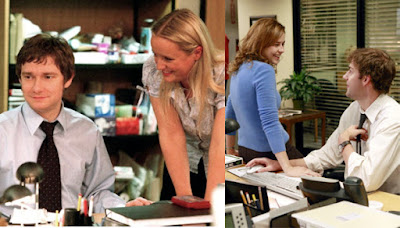 As I talked about in this post, movies (or short-term TV series) sell us the fantasy of change: this is the story the most important and transformative thing that has ever happened to this person...the moment they finally turn their lives around.  Obviously, you can’t do this on a long-term TV series, since the characters have to generate equally good stories week after week, year after year.

The UK “Office” was conceived as a 14-episode show, so they were allowed to have a hero, Tim, who desperately wanted to quit his paper company job, and ultimately succeeded.  But when Tim was transformed into Jim for the American version, they knew that they wanted the character to remain compelling for at least 100 episodes, so they tweaked him: he was still frustrated, but no longer dreamed of quitting...now he dreamed of fixing the place from within, a quixotic quest that he could never achieve, ensuring several years of good stores.

Another pairing of characters on the two versions of “The Office” illustrates another demand of long-term TV characters: They must be good at their jobs (at least a little bit). 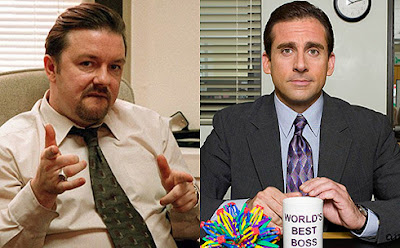 In the short-term UK version, Ricky Gervais’s David Brent was hopelessly incompetent, and we watched his 14-episode downfall.  The American version had to last longer, so they added a brilliant and tragic new dimension to this character: Steve Carrell’s Michael Scott was still a terrible boss, but he was a brilliant salesman.  He had simply been promoted out of the job he was great at into a job he was terrible at.  Once we realized this, we didn’t really want him to be fired.  Instead we wanted him to find a way to resolve this (irresolvable) paradox.

Even then, it’s important to note that Michael Scott is the exception. Most TV characters, whatever other flaws they have, are flat-out great at their jobs. 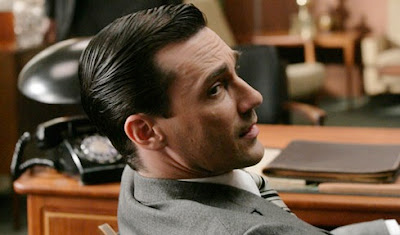 This is true no matter if you have a “stand up and cheer” hero like “The Mentalist” or the “CSI” techs or a morally ambiguous hero like Tony Soprano, Don Draper or Vic Mackey.   Whether or not we want them to succeed at their life goals, we insist on watching them run rings around their co-workers.  Ask anyone who has ever created a TV show and they can tell you that the number one note they got from the network, over and over, was, “Make them better at their jobs!”

This is yet another problem with shows about rookies.  For rookie shows that do succeed, the clueless hero who has just entered into this world invariably has some in-born talent that automatically makes them better at some key aspect of the job than everybody who is giving them advice: This is true of Buffy on “Buffy”, of Merlin on “Merlin” and even of Walt on “Breaking Bad”. 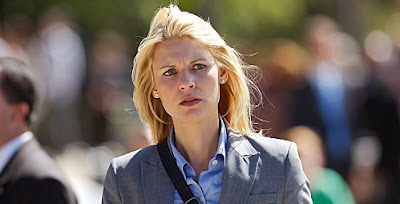 “Homeland” is an interesting exception.  Carrie is a very rare type of TV hero: a veteran screw-up who is always on the verge of getting fired.  But the thing that makes her a screw-up, her mental illness, also gives her an ability to make connections that all the other spies miss, and they know it, so they have to keep her on.

This points us to another aspect of TV characters that help makes them irreconcilable: their flaws are inextricably tied to their strengths.  This brings us back to one of my favorite character intros: Clooney’s Dr. Ross on “ER” gets too emotionally involved, which makes him need to drink, but it also makes him a great doctor.  We wouldn’t want to fix him, any more than we would want to fix Carrie, even though we know that their irreconcilable contradictions are tearing them up inside.  Their pain is our gain.
Posted by Matt Bird at 6:30 PM

Another top notch post, Matt. I especially like the insight you have about faux rookies like Walter White, genius amateurs who almost seem to have been waiting in the wings all along to show up the pros at their jobs.

I'd say Richard Price's new NYC 22 pilot follows this formula of the precocious rookie pretty closely, trying to give us a little taste of what skills and experiences each rookie (beat reporter, homegirl, homeboy, Army MP, Pashtun speaker, multi-generational family legacy recruit) brings to the table that makes him/her a better cop than most on day one. Of course, they all work together in one precinct. Who knew the NYPD had such a vast pool of newbie talent?

Too bad the show doesn't seem like it will make it. I don't even know if I can stomach another episode. The very things that interest Richard Price most in his great urban novels and scripts for THE WIRE -- the endless nuances and details of hanging out with cops on the street -- are too hard to shoehorn into the 5-act cliffhanger structure of a major network series. And they've been done better on older shows created by his peers like HOMICIDE. I'm surprised Richard Price himself wanted to take it this far with a network like CBS that likely demanded many of the changes that make it seem so much less interesting than it could be.

I just watched NYC 22. Ugh. CBS keeps hiring great writers and then pummeling them into submission, forcing them to turn out CBS-brand mush. This pilot did EVERYTHING wrong. Watching it caused me to generate additional "Do NOT do" rules, which you'll see soon.