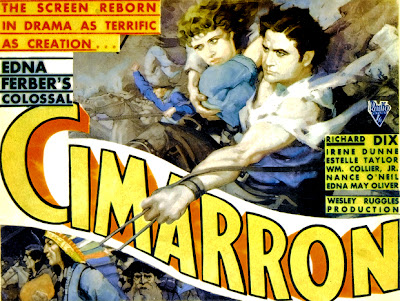 The Year: 1931
What the Nominees Were: Cimarron, East Lynne, The Front Page, Skippy, Trader Horn
Other Movies That Should Have Been Considered: Frankenstein, Little Caesar, The Public Enemy, Street Scene, and our winner…

What Did Win: Cimarron
How It’s Aged: Very poorly.  This talky western melodrama’s half-hearted whispers of feminism were drowned out by a roar of unintentional racism. 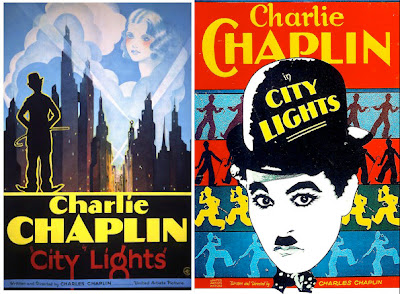 How Hard Was the Decision: This was a tough call: Frankenstein is pretty much a perfect film, and Vidor’s Street Scene is an underrated masterpiece.  Plus, it was hard to convince myself that this lone silent hold-out could have won in 1931… but City Lights is such an ideal “you’ll laugh / you’ll cry” combination that I’m convinced the Academy could have been honored it if they had overcome their prejudice just a little bit. 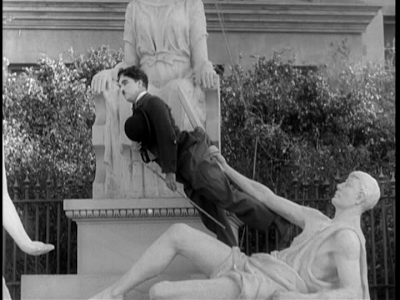 The Story: The little tramp is back to take on the Depression.  He falls in love with a blind flower girl, then rescues a suicidal millionaire, who goes back and forth between lavishing gifts on him when drunk then kicking him out when sober.  Can the tramp stay in his good graces long enough to help the girl?

Any Nominations or Wins:  None whatsoever!
Why It Didn’t Win: It’s simple enough: Chaplin was the only filmmaker who refused to transition to sound.  He broke off and went his own way.  This movie was not at all the image that Hollywood wanted to project in 1931.

Why It Should Have Won:
How Available Is It?: All of Chaplin’s movies are available on the same so-so DVDs from the ‘90s.  They’re crying out for new editions.

I believe that CITY LIGHTS has aired in HD on TCM. And that there's definitely a Criterion Blu-ray in the works. CIMARRON is so bad that even a genius of the Western genre like Anthony Mann couldn't do much with it when he remade it 30 years later. Of all the Westerns he's made it's probably the one I like least.

Believe it or not, I was actually forced to read the book Cimarron in high school. Edna Ferber wrote great stage plays, but that book: oof.

I like your style: brief and informative. Good job!

DR OYAGU herbal medicine is a good remedy for herpes simplex virus cure. My name is MIGNON WRIGHT , am from USA,I am here to give my testimony about DR OYAGU who helped me in my life, i want to inform the public how i was cured from (HERPES SIMPLEX VIRUS) by DR OYAGU, i visited different hospital but they gave me list of drugs like Familiar, Zovirax, and Valtrex which is very expensive to treat the symptoms and never cured me. I was browsing through the Internet searching for remedy on HERPES and i saw comment of people talking about how DR OYAGU cured them, when i contacted him he gave me hope and send a Herbal medicine to me that i took and it seriously worked for me, am a free person now without any problem, my HERPES result came out negative, I pray to God to never let me and my family forget you in our life, am now cured permanently, you can also get your self cured my friends if you really need this doctor help, you can reach him on his website ;https://oyaguspellcaster.wixsite.com/oyaguherbalhome Email: oyaguherbalhome@gmail.com or via whatsapp +2348101755322