How to Create a Compelling Character, Addendum: What Are the Rules They Live By? 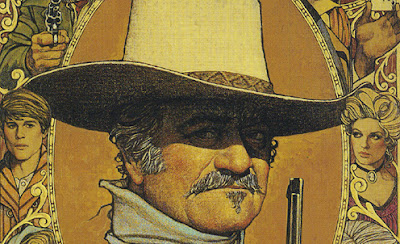 The original purpose of these “compelling character” pieces was to eliminate the hundreds of questions (Where did their grandfather go to college?) that some writers feel they have to answer about their characters, and boil it down to a small number.  But that number just keeps growing!

Nevertheless, as I was working on the rewrite I just finished, I kept realizing that, through I had answered all my core questions about each character, I still didn’t know them well enough.  Then I realized: most of my questions are about knowing my heroes externally.  The questions are focused on what I think of my characters, not on what my characters think of themselves.

Then I tried asking a question I’d never asked before and it did wonders for my rewrite: What are the rules they live by?  Every character has these, though most don’t state them out loud, as John Wayne does in The Shootist:
One problem I had with my script is that my characters, who all went to college together and had the same job, just weren’t differentiated enough.  This turned out to be a great way to differentiate them.  Here’s what I came up with: 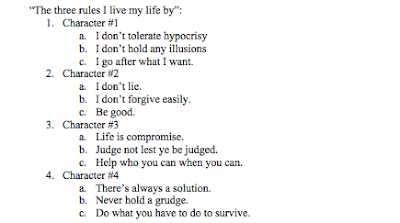 This helps me love my characters, and it also helps me polarize them in a non-judgmental way.  As you can see, I tried to force myself to stick to what they people would actually say if asked.  Nothing like “I can’t stand dirt”, or “I don’t like kids”, or “Never get off the couch”  Those may be rules that actually define a character, but the purpose of this exercise is to get to know their self-image.

The advantage of listing these rules is that they force you to listen to your characters and allow them to define themselves.  It’s easy for a character to become just a bundle of flaws: a false goal, a false statement of philosophy, a limited perspective and a long host of ironic failings.  But they don’t know that.  They’re just living their life, doing their own thing in their own time, so you need to know what that thing is, as they see it.
Posted by Matt Bird at 6:23 PM

j.s. said...
This comment has been removed by a blog administrator.
7:13 PM

Wow, J.S. got it. I thought it was ungoogleable. Surely you didn't just know it? It occurs to me that the rights holders may not want it known that it's getting made yet, so I decided to delete it. (And if you know the story, or read a plot synopsis, then you might be able to figure out which Underrated Movie this is the thriller version of)

Allow me to clarify: I had originally included the character names and dared anybody to guess what story I was adapting, since it didn't seem to come up on any google searches, but after j.s. got it, I realized that you could specifically search within "Google Books", so I went back and took out the character names.

Once again, I'm late to the party. Story of my life.