Hey, where’d the apes go? They escaped from today’s post! 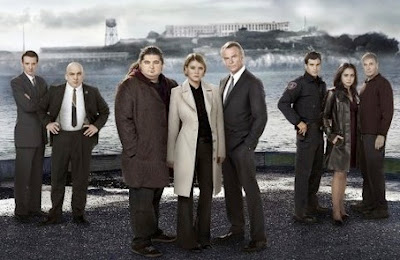 So I watched the “Alcatraz”: pilot and it’s…okay. Fun idea, some good actors (not counting the too-cute lead), zippy execution… but it doesn’t add up to anything. Whenever I find myself watching something like this and wondering why it’s not as interesting as it should be, I take a step back and ask myself, “Okay, what exactly is the metaphor here?”
“Alcatraz,” I suspect, will never work because it’s not really a metaphor for anything. Compare this to the previous J.J. Abrams Jorge Garcia show about an island, “Lost”, where the “island as redemption” metaphor was quickly established.
Now let me be the first to admit: not every fan feels this way about genre shows. Some just enjoy the genre trappings and they could care less what it all means. I was a big fan of “Buffy, the Vampire Slayer” but quickly lost interest in its spin-off “Angel”. “Buffy” created an extremely rich and flexible metaphor for high-school, coming-of-age, sex, betrayal, empowerment… and almost any other topic the creators wanted to cover, but “Angel” never found its metaphor... 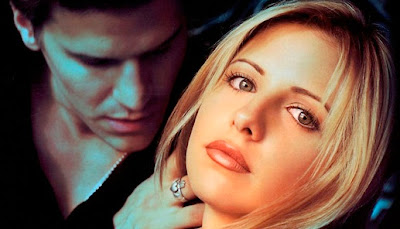 At first, it seemed like it might be a metaphor for addiction and recovery, which might have worked, but “Buffy” had already given Angel an epic relapse and redemption arc, which pretty must used up that material, leaving the spinoff with nowhere to go. Ultimately, “Angel” was about a vampire private detective fighting the minions of a vampire law-firm. Huh? What does that mean?
But many fans loved “Angel” anyway. The show had some fun horror plots and charming characters. Why nitpick it? The problem, to my mind, was the law of diminishing returns. Once “Angel” de-coupled itself from the rich vein of meaning that underlay “Buffy”, it could keep pleasing old fans, but it wasn’t likely to earn any new fans.
Fans don’t need a lot of metaphorical meaning in order to keep watching, but they do need it to fall in love in the first place. “Angel” was a perfectly-acceptable continuation of the “Buffy” universe, but it never found its own metaphor, so it could only be a moon reflecting the light of Buffy’s sun.

To work on its own, “Angel” would have had to start over from scratch with a new metaphor. We’ll get to how to do that tomorrow... (Can you guess which movie will be our example?)
Posted by Matt Bird at 7:06 PM

Would you say this idea of a controlling metaphor is different from theme? If so, how?

This seems like a good place to stump again for INVISIBLE INK by Brian McDonald. Here's a free link, but do yourself a favor and spring for the paperback:

It's interesting-- sometimes the metaphor is the theme. On "Lost", being stranded on the island was a metaphor for the universal struggle of fate vs. free will, which was also the theme of the first season...

But sometimes, when the metaphor is more concrete, it's different from the theme. "Buffy" had many metaphors: "High school dramas feel like the end of the world" and "Sex can turn boys into monsters", to name two. But I wouldn't call either of those two the theme.

For instance, one "good vs. good" theme in Buffy was "fitting in vs. standing out". Another was "faith vs. skepticism". Neither of these was the metaphor.

Certainly, with "Alcatraz", you could just as easily say that the problem is that it has no theme... I guess you might say that just having a metaphor doesn't necessarily provide the theme, but it's pretty hard to have a theme if your story isn't a metaphor.

Just saw CHRONICLE and have to say that it was better than I thought it would be and more effective in many ways than I imagined -- even with a questionably justifiable "found footage" conceit -- largely because the metaphor is such a great fit for its genre story.

A friend of mine complained that virtually the whole film takes place in what Blake Snyder would call the "fun and games" part of the story. But in CHRONICLE this unusual structure is a feature and not a bug.

As in UNBREAKABLE, most of this unconventional superhero story is taken up by the heroes' discovery, exploration and testing of their powers. (Which would be just one or two steps in someone like Jule Selbo's structure).

But it works and rings emotionally true because of the age of the characters. They are teenagers. And isn't being a teenager largely about playing with, testing the limits of and sometimes going too far with your newfound power?