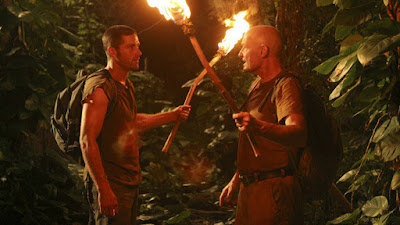 As I was writing next week’s pieces on how to structure a movie, something finally clicked for me. I’ve said before that the theme of a movie shouldn’t be a clear moral statement, but rather it should be phrased in the form of a question. And as I said here, sometimes this question is actually asked out loud (but not answered) near the beginning of a story, so that it comes to hang over all the actions that follow.

But only recently has it become clear to me how important this really is, and how important it is that the two ideas being pitted against each other are both morally good ideas. As McKee says, a story cannot be about good vs. evil or it will be a no-brainer. Every story must have at its heart a question of good vs. good: two equally appealing but irreconcilable ideas, such as…

These dilemmas need not dominate the story immediately. Slowly, over the course of the emerging conflict, it should become become clear that there is a fundamental human dilemma underlying the interpersonal conflict.

This should be an irresolvable dilemma, and so you should give both sides equal weight for as long as possible… until the climax. The trick is to come up a finale that addresses this conflict, and says something concrete about it, without definitively declaring one side to be right and the other side to be wrong.

The first three seasons of “Lost” each had a powerful overarching theme:

Okay, I got that out of the way, now let’s move on to How to Structure a Movie...

Your post is about a clash between two "goods," but can a film or TV story ever sustain itself through a conflict between two competing and equally unpleasant "evils"?

Yes, that can work too, but it's more rare, and inevitably more depressing. The first two seasons of Breaking Bad are basically a dilemma of evil vs. evil: for-profit health care vs. drug dealing. Donnie Brasco is lies and betrayal vs. loyalty to the mob.

This is an excellent point that doesn't get made enough. It is so often the difference between a bad popcorn flick (nazis are bad, americans are good) and a truly great movie (does it make sense to risk the lives of several men to save one private ryan under special circumstances?.) Million Dollar Baby comes to mind too -- is it more humane to kill her or to keep her alive? You should have to struggle with the answer to that all-important central question in thematic movies.

Thanks, Matt. That's an illuminating way of putting it with respect to BREAKING BAD, a show which was very much on my mind when I wrote the question.

I'd say that crime stories, horror stories and serious literature and theatre can utilize the bad vs. bad conflict more easily than most film and TV.

David Mamet has some very similar ideas about the nature of dramatic conflict in his writings. And for thinking of the theme as a kind of central argument of the story, Brian McDonald's INVISIBLE INK is also quite useful.