What's the Matter With Hollywood, Part 6: The CGI Disaster 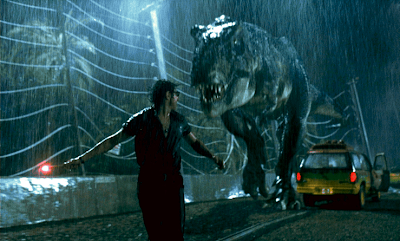 When CGI (computer generated imagery) first became convincing, with the one-two punch of Terminator 2 and Jurassic Park in the early ‘90s, it seemed like a great leap forward in action/adventure filmmaking. When Braveheart used it a few years later to create fake armies, it seemed like it might save the historical epic, too. Then everything went to hell.

The problem with CGI was that it made not one promise but two: it wanted to make movies both cheaper and better-looking...Spend less, get more. But, as often happens when a business pursues two contradictory goals at the same time, Hollywood got its wires crossed, and somehow the process totally backfired: It soon became, “Spend more, get less.” We now have the first generation of Americans who have come to expect a lower quality of special effects than their parents did. CGI has lowered the bar.

The first generation of CGI creators understood both the promise and the limits of the technology: it could do things that their models couldn’t do, but it couldn’t actually replace the models: T2 and JP were still filled with model work. CGI merely bridged the gaps where the models failed. But as CGI spread, the effects creators soon found actual models more and more annoying: Models made you deal with factors like gravity, light, and physics, while CGI offered the promise of a weightless, shadowless, free-flowing world, where hollow pixels could bounce around the screen at the same speed as the animators’ imagination.

In the original King Kong, the model had to be sturdy and support itself. It wasn’t sprightly. It had to lumber about—like a real ape. In the 2005 remake, Kong was allowed to skate on a frozen pond, swing on vines, even fall off a cliff only to land as light as a feather. And why not? He was clearly hollow: sunlight seemed to pass right through him. He was not an object anymore, he was an effect. The result was laughable. By 2005, we had managed to lose the progress that we had made by 1933.

But before the ape even appeared, effects had already killed off any sense of believability. When the crew first disembarks in a small boat to row to the island, we see the CGI boat beating against the CGI waves, and we can see that the effects team added in all sorts of wave-breaking effects using the wave-breaking tool, but the final result bears no resemblance to what a real boat looks like in real water.

The answer would seem to be “because it’s cheaper,” right? Nope. CGI has inflated budgets to truly gargantuan levels. Unconvincing effects are no cheaper to produce, because a big part of the process is all the endless tinkering. Every effect can be done and redone and redone again. Each re-do jacks up the price, but only makes the effect worse, because they’re just adding artificial layers to artificial layers.

No, there’s a different reason that they didn’t put a real boat in real water: abject laziness. We’ll pick up there tomorrow.
Posted by Matt Bird at 10:23 PM

First off, let me just say "Thanks", for your blog. I highly enjoy your analysis and recommendations, I blew nearly a day reading all your back posts a while back. And further, I want to agree with your assessment of the over use of CGI and its effect on Hollywood. Unfortunately the flood of bad CGI seems nowhere near abating. Have you seen this bit about a Disney exec and how audiences want spectacle not story?

Gosh yes. Amazing how much money can go into such a sparkly load of crap.

Sometimes I also wonder if all the money is going into the CGI budget and writers are being hired at all.

Such as in transformers. Did the CGI team write those screenplays at 4 in the morning?

The "05 King Kong did some things well, but I always wondered why it didn't resonate more with me. I never noticed the boat/waves thing consciously, but now that you mention it, I can see how lot's of corner-cutting with CGI would weaken the visual reality of the story. Thanks for pointing this out!

By the way, Lord of the Rings didn't seem to overuse CGI, so I wonder what changed?

Once there's a CGI team on a picture, simple stuff is done in the computer instead of on the street. It gets crazy. There was an Invisible Man picture where they wanted his cape to flutter. So they spent $$$$ building cloth modeling tools rather than float a real cloth cape on mono (clear fishing line). Cost a fortune, worse than real.

Even worse, actors (Big Stars) get lazy: Warren Beatty leaned out of his key light in a shot once. When they wanted to do it again, he refused. "Fix it in post."

that cost a lot of money for hand painting pixels to bring up the brightness. A 2nd take would have been negligible. But no one argued with Warren, then.

That time has passed.

Enjoyed your post, and wanted to comment. CG not being a physical item is not responsible for the lack of weight. Harryhausen's kong did not respond to weight better than CGI because of being physical, it had a stiff armature and did not move unless pushed, it was static when each frame was captured. The feeling of weight did not come from the real time effects of gravity, the sense of weight came from the timing and spacing of the animation, in the difference of pose from frame to frame, -just as it does in CG. The Feeling of weight as imparted through motion is the responsibility of the artist and director (and the many people between).
CG suffers more in allowing for lots of change, and not forcing someone to commit to what they are doing. in one way it's good and smart for a director to keep options open, in another it keeps their direction vague and allows many others to muddy the waters with their notions and ideas. It also means that once something is in play little steps are taken, rather then the big bold steps that would be forced on smaller budgets, or limited attempts.
CG is cheaper and easier in many situations, miss use of of it on the other hand is not.
If you come to a model shoot, a set build, lighting set up or most anything that should be well planed and thought about before execution, yet have not planned for it because you presume it to be easily adjustable, both now and in the future, then you will waste time, and loads of money. CG is no different, it will cost you in the same way, more so if you discount the effects of your changes.
However, the same effort and conviction put into GC will yield better results because of this flexibility. Particularly in the case of creatures and even in the pre-vising of practical effects. The killer here is indecision and the notion of it being readily flexible.
Miss use of CG is a problem, not CG itself, CG is a great facilitator. Unfortunately it can also facilitate idiots making larger and larger mistakes that practicalities with other approaches may have hindered.
I.E the notion of rebuilding a set or a practical element is taken far more seriously than changes that force a rebuild in CG.

Beth: Why is Lord of the Rings better? Well the trilogy does have a fair number of shots that don't withstand close scrutiny, but the effects were far better overall than King Kong. First: there was much greater use of practical effects. Second: they had a lot more to prove, so they poured a lot more effort into it. Third: there's a reason that those movies made so much money and yet still drove their studio out of business! They poured money onto the screen until they got it right.

Shorty: Thanks for your in depth analysis. It sounds like you're saying that CGI has fostered a "measure once, cut twice" mentality, which is a great way to lose money.

It was a very good post indeed. I thoroughly enjoyed reading it in my lunch time. Will surely come and visit this blog more often. Thanks for sharing. 4x Gnula

Basically, I was looking for PhD Research Proposal Writing Service that can write my proposal by tonight, when I landed on your site. However, I know it is not useful to me for now, but I found it really useful and I enjoyed a lot of reading. I must say, keep sharing such information.

Hey friend, it is very well written article, thank you for the valuable and useful information you provide in this post. Keep up the good work! FYI, please check these depression, stress and anxiety related articles:
Essay On Gallantry Award Winner , How to use credit cards wisely and make money, 365 Tales from Indian Mythology PDF Free Download

Good blog. Keep sharing. I love them Are you also searching for dissertation writing help? we are the best solution for you. We are best known for delivering dissertation assignment services to students without having to break the bank

This is a great post, will be back for more. Seeking reliable spanish writing help online, worry no more, at Academic Writers Center we offer quality help.

Your blogs are great.Are you also searching for Cheap Nursing Writing Services? we are the best solution for you. We are best known for delivering nursing writing services to students without having to break the bank.whatsapp us:+1-(951)-468-9855

Your blogs are great.Are you also searching for Cheap Nursing Writing company? we are the best solution for you. We are best known for delivering cheap nursing writing services to students without having to break the bank.whatsapp us:+1-(951)-468-9855

All your hard work is much appreciated. Nobody can stop to admire you. Lots of appreciation. CPM SEO