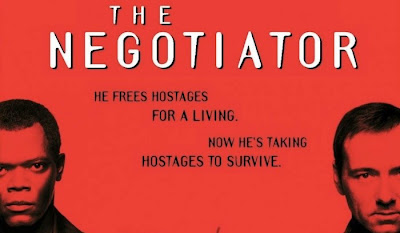 If you’ve done a good job creating your characters, they will speak to you. Instead of hand-crafting their dialogue, it’s always better to just listen to what they want to say. But this can be a problem: sometime they refuse to push the plot in the direction you want it to go.

When your character suddenly tells you, “I won’t do that”, what do you do? You have five options:
When I write thrillers, this is a constant problem. My characters always want to call the police and shut the whole movie down. This is especially tricky when I’m doing an adaptation for hire, where the producers and I have carefully constructed a very specific outline before I start writing. That means that when my heroes object, I can’t let them take the story in a new direction, so I have to go back and preemptively preclude all of the safe options until the characters are forced to step down the dangerous path that the producers have demanded.

But never forget when this happens that this is a sign you’re doing it right. Don’t force your characters to create the drama by acting unreasonably. Trap your reasonable characters into dramatic situations, then let them fight their way out of it as logically as they can. Anytime they create the problem by doing something stupid, the audience will be enraged.

The Negotiator had a good cast and a potentially fun premise: a top hostage negotiator is framed for a crime by his fellow cops and winds up taking his own headquarters hostage until someone will listen to him. Seeing the trailer, I was suitably intrigued: how would a negotiator get backed into doing the one thing he knows not to do? But the actual movie was ludicrous: they were in so much of a hurry to get to the premise that taking hostages wasn’t the negotiator’s last resort—it was his first!

Circumstances didn’t trap him, he just foolishly trapped himself, so it’s hard to be sympathetic. Rather than take away all of the other options, the writer merely plugged up his ears when his character started shouting “I WOULDN’T DO THIS!”
Posted by Matt Bird at 8:25 PM