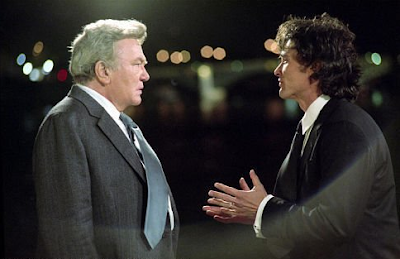 We all know that movie producers tend to get skittish. At the last minute, they often demand that writers tweak the heroes so that they suddenly become “more sympathetic.” This can often result in ludicrous decisions. I saw two movies in 2003 that didn’t work for precisely the same reason: both were stories of husbands seeking redemption for cheating, even though they hadn’t actually cheated!

Tim Burton’s Big Fish is all about a son’s attempt to forgive his fabulist father (Albert Finney) for betraying the family. Finney’s stories may be amusing, but they can’t cover up the fact that he left the family for another woman. Finally, he has to stop lying and admit the truth—that he didn’t cheat on his wife. Sure, Finney ran away and went to live with Helena Bonham Carter, but heavens no, he never actually slept with her—that would be unsympathetic! (Of course we all know that Burton had his own affair with Carter, and most of his fans forgave him, but heaven forbid they be allowed to forgive somebody onscreen for the same transgression.) 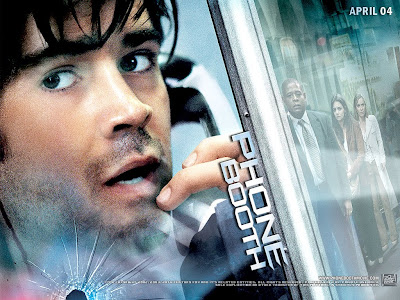 Shortly after that, I saw a different movie that was new to DVD, Phone Booth. Colin Farrell is a sleazy agent who stops off in a phone booth to call a woman who isn’t his wife. While he’s there, a sniper who has bugged the booth starts shooting at him and threatens to kill him unless he calls his wife and comes clean. Finally, he has a tearful breakdown and calls his wife to admit the truth—he didn’t cheat on her. He just thought about it.

I am quite sure that, in the original scripts, the protagonists had actually cheated on their wives. But some producer said, “Hey, he can't do that, that's unsympathetic!” But this makes no sense. If a story is about a man’s quest for redemption, then that quest will only have meaning if he’s actually guilty. The audience doesn’t merely sympathize with “goodness.” We sympathize with difficult dilemmas—the more difficult the better. Redemption stories are about dealing with the consequences of mistakes. The bigger the mistake, the bigger the consequences, and the more involving the story will be.

Everybody loves “A Christmas Carol”, but that wouldn’t be true if some producer had insisted that Scrooge not be too mean to the Cratchetts.
Posted by Matt Bird at 11:20 PM

Erectile dysfunction was ruining not just my sex life but also my marriage.

I was going to lose everything, even my kids...

Until I discovered an amazing life hack that allows me to get my dick diamond hard, and ready for hot passionate sex with my wife on demand!

This is not a joke. You CAN beat ED safely, and naturally without wasting money on dangerous pills for the rest of your life.
Watch the video below and learn how I did just that, and how YOU can too!

The funny thing is, even though my marriage is saved, I almost wish I was single again with my newfound explosive sex drive and libido.
I hope my wife doesn't divorce me for wearing her out every night... ;)

It's amazing that the secret to regaining your sexual vigor and killing ED permanently is all-natural, easy, and affordable.

The answer to your erectile dysfunction problems has been right in front of you this entire time...

Use the link, watch the video. You won't believe how simple turbo-charging your penis, and beating ED really is.

P.S. Getting rid of ED isn't just about better sex, it's about regaining your pride and self-respect as a man.

Watch the video and learn how easy it is to go from having a "wet noodle" to rocking a massive diamond hard erection your partner will want inside her every night!

I learn some new stuff from it too, thanks for sharing your information. block and bleed valve @Kyle