How to Build a Scene, Part 3: Choose an Emotional Location 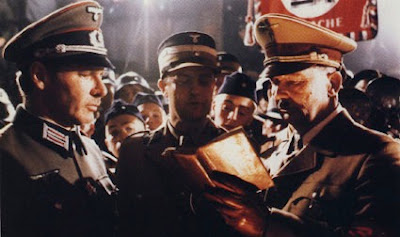 I’ve talked before about the value of choosing locations that keep your characters on their feet, but think about locations that emotionally heighten scenes as well. Every scene will become much more interesting if you can set it in a place that your hero either longs or loathes to go, rather than in a neutral place that they have no feelings about. Either way, you’ll make it tougher on your them.

If your heroine has to say something to her now-married crush, and he ushers her into another room for the conversation, have it be his bedroom and not his living room. Every time she takes a step closer or farther from that bed, she’ll feel it.

As I mentioned before, The Town does it wrong. A bank robber has to woo the teller that he held up, so he meets with her at a Laundromat, then a Dunkin’ Donuts, then a community garden. These are neutral locations. If he has to talk to her again, why not force him to go back to the bank to do it? That’s a very uncomfortable location for him. It will constantly remind both him and the audience of the essential danger of this relationship.

This is your world. If you create a setting with subtextual meaning, then that’s one less thing you have to cram into the text. You take the burden off the dialogue. Don’t make your characters keep saying what they’re worried about, put what they’re worried about in the room, between them and their goal, and force them to physically go over, under, or through it to get what they want.

Don’t get embarrassed. The audience is far more accepting of unlikely locations than they are of melodramatic dialogue. If you give your actors a lot to react to, then they get to underact. If you make them churn up all the drama through dialogue, then they have to overact. Make it easy for them by choosing a location that is as extreme as you can get away with. Don’t just lower your archaeologist into an ancient crypt, make it an ancient crypt filled with snakes (after you’ve pre-loaded the scene by mentioning that he really hates snakes). Don’t just put him undercover at a Nazi rally, put him face-to-face with Hitler! Now you’ve got a memorable scene.

Excellent point. I never thought of this, but it's such a powerful tool! I'll definitely be looking for opportunities to do this.

It's sometimes tough if you're writing something that aspires to be more realistic or procedural to know where to draw the line location-wise. Not every hero can believably come face to face with Hitler. And not everyone has a plausible motivation for being in the most interesting place they might be. One little variation I heard from Clifford Odets via the special features on the new Criterion BD of SWEET SMELL OF SUCCESS is simply to add more characters. Don't have an important scene play out with only two characters. A third or fourth interested party either interrupting or distracting or trying to eavesdrop or just ignoring the leads and doing their own thing as they would in life can open up a scene to new and truer levels of conflict and authenticity.

But every hero can come face to face with _their_ Hitler.

Certainly, you're right that such encounters are not entirely realistic... in a sense. This is an example of the difference between realistic and plausible. By putting your characters in extreme situations, you can create encounters that are entirely plausible, though not actually realistic...

In real life these things tend not to happen because people cling to safe spaces. One of the HUGE problems in adapting true stories or bio-pics is that real-world heroes tend to never actually meet their antagonists face to face. Because why would you? If you're locked in a power struggle with someone, they may dominate your every waking thought, and everything you do may be designed to take them down, but you're not going to ever go to their office and talk about that.

One of the most epic civic battles of the last century in the US was the one between Robert Moses and Jane Jacobs for the soul of New York, but I'd bet that they never actually met, which would make it very hard to make an honest movie about it.

If I see this entry as an extension of your idea of taking away the safe places, it makes much more sense to me.

But on first glance, especially in light of the Indiana Jones reference, it almost seemed like you were advocating something similarly extreme with all movies. And you probably are, at least in theory, though how it plays out is all in the details.

For instance, in THE TOWN, it would make sense to force Doug to meet Claire again at a bank. But wouldn't it be even more dramatic and less safe if it were, say, a Federal Credit Union where, I don't know, all of the Boston FBI guys went? And standing in line on that very day was his nemesis Adam Frawley?

That would probably be too much for me, breaking the more realistic tone of the world and taking me out of the story. But surely there's some wiggle room between a neutral laundromat and the Boston's most dramatically dangerous bank.

Off-topic a little: One of the things I think THE TOWN does pretty well to shore up this weakness of not coming face to face with the antagonist is to give Doug multiple secondary antagonists that he does face off against -- loose-canon partner James, evil boss Fergus and metonymic stand-ins like that lone beat cop in the middle of the street after the nun robbery.