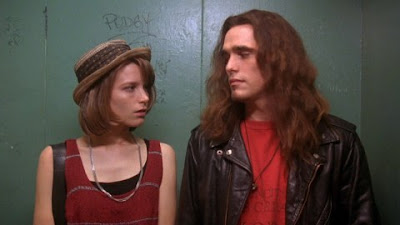 Screenwriters, playwrights and novelists have a wonderful tool that serialized writers lack: we can write backwards. If you find you’ve run into trouble with a scene, or a character, or a plot, don’t try to plow forward and write your way out of it. Plow backwards, and bury the seed of the solution far enough in the past that it’ll be ready to sprout just when you need it. As with most other problems in life, the best time to fix a scene is before it starts:

Think of the scene in Singles where Bridget Fonda sneezes and her humbled ex-boyfriend Matt Dillon automatically mumbles, “Bless you.” That’s it, but it’s a wonderful love scene, because we had heard her tell a friend many scenes back about how heartbreaking it was that he never said that. Rather than put them in that elevator and force them to spew reams of dialogue about how he’s changed and how she’s maybe ready to believe him, we get a wonderful two word scene that convinces us they will get back together, because the writer was clever enough to lay the groundwork beforehand.

Audiences love this. We love learning the secret language of characters. We love knowing that, for her, “bless you” means, “I love you.” We love it especially when we forget all about it, then see it suddenly pay off much later. Only if we know the characters’ expectations beforehand can we experience the same emotion reactions at the same time as they do. This is true emotional identification.

I'll go you one better. If you're having problems with the structure of a sequence, an act or even a entire script, start with the ending and work it out step by step in reverse. I've just finished a draft of probably the plottiest thing I've yet done. And the only way I could figure it out was to write it backwards, sequence by sequence, finally setting up in the beginning what I'd already paid off.

I'm in a similar situation, alas. I'm also writing something (not the adaptation) that is very plotty, and I've stopped going back and planting everything I need to set up because it's just too much. Instead, I'm just started "paying off" stuff I haven't set up yet in every scene. When I'm done with this terrible first draft, I'll work my way backwards and fill all that set-up in.

The risk in writing backwards is that character development can end up seeming non-organic, because the characters never have a chance to say to the writer, "I wouldn't do that." For my draft, I'm trying to get all the emotional beats right and leaving the plot details fuzzy the first time through, but that's dangerous, too. It's hard to have specific emotions about generic events.

Joshilyn Jackson's Gods in Alabama(which someone should option) has lovers on a car trip play "What have I got in my pockets, in which one player tells the second half of a story and the other figures out what happened in the first half. What's true, of course, is that the book itself is a game of "What have I got in my pockets," with much of what the heroine believes/tells us being untrue. A good shorthand for this gambit.