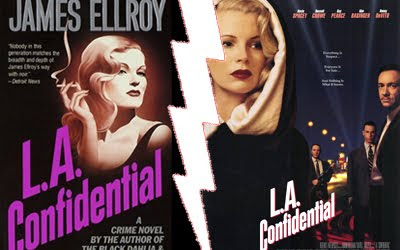 It all comes down to this: A book is a friend. A movie is a stranger with a problem.

You invest more of yourself (i.e. more money) in a book, you invite it into your house, you visit it multiple times for multiple hours, you have to actively commit to it in order to keep the experience going. But a movie is totally different: You invest less; you meet it socially, in a neutral location; you only agree to sit down with it once; and you can just sit there passively and judge the story, without committing to it. Therefore the movie (the stranger) must stick to the point, in a way that a book (your friend) doesn’t have to do.

Every scene in a movie has to be (at least tangentially) about one problem. After all, if you agree to sit down with a stranger to talk about their problem, then you will become very impatient if they suddenly start talking about something else from their life unrelated to that. There is an understanding that you’re only there to hear about one thing. Friends, on the other hand, can jump around and talk about a bunch of different problems or just make idle chit-chat about what they did all day. You like the sound of their voice, and if they drop a random tangent they can always finish it up at a later time.

The book “L.A. Confidential” had a massive sub-plot about the hero’s difficult relationship with his retired father. The screenwriter struggled mightily to include it, but it shrunk down more and more in each draft. Finally, it disappeared altogether, and the hero became an orphan. Wise move. There’s nothing worse than an adaptation that feels the need to include brief glimpses of every subplot from the book, even if they won’t have the time to play out in a satisfactory way.

As always, when writing a movie, think of that talkative passenger seated next to you on the plane. If he starts telling you a surprisingly involving story about some police corruption he helped to expose, would you want him to suddenly say, “Oh, by the way, at the time I was also dealing with a lot of issues with my father, so let me tell you about that, too...” Nope. You would say, “Actually, I’d much rather hear the end of the story you already started, if that’s alright with you.”

But I've also borrowed library books for no cost to me at all but my time, stopped reading books that didn't "serve their story" by gripping me in some way within the first hundred pages, turned off DVDs and walked out of movies I've borrowed, rented, paid for and/or gone to the theater for if they didn't show me something interesting in the first 30 minutes. Not to mention investing hours and days of my life watching long form cinema like Rivette's nearly 13-hour OUT 1.

I agree with all your points generally and most of your conclusions, but I also think there's something like a hyper awareness of the value of the individual audience member's time and a new convergence of entertainment options that is already upending some of the laws you are delimiting and turning toward more hopeful trends.

With so little time to spend (or waste) and so many options it seems natural to me for viewers to expect a little more personality/waywardness in their blockbusters and readers a little less indulgence in their books.

Or look at the way, in the wake of the success of novelistic cable shows like THE SOPRANOS, THE WIRE and MAD MEN, all the networks are scrambling to insert more book-like storytelling values into their TV line-up.

Kubrick used to say that the perfect literary source for a film was a short story. And many of the best short stories I've ever read have stayed with me far longer than most novels. It's the economy of the form that's the challenge. And I suppose it's not all that much different in screenwriting. You can't do WAR AND PEACE but you can do everything from "The Lottery" to "The Dead." And that's a whole universe of options.

To a certain extent I'm focusing on the experience of the quickly-vanishing "ideal consumer" (hardback-buyers and theater-goers) of each medium because they are the targets that the producers of those media are aiming their products at, not library readers of DVD renters, who don't pay the bills. Writers working for publishers or studios learns to aim their product at their boss's favorite customers.

Certainly, as you point out, TV is becoming more and more of a happy middle ground between novels and movies, and I hope that trend continues.

And I certainly agree with Kubrick, having just gone from adapting a short story to adapting a novel, which is more work. Stories, left to their own devices, will always expand, never contract.

I can't help but feel that I have totally missed the message of this post. Isn't there almost always a personal story in a movie?

Doesn't Bruce Willis in Unbreakable have a crumbling marriage and an unbreakable body?

Excellent point, but the answer is in the question: it's no coincidence that Willis's marriage is in ironic counterpoint to his superpower. If, on the other hand, the problem in his marriage was that his wife always had her annoying sister hanging around and that drove Willis crazy, then that wouldn't work as well. Two problems that counterpoint each other become one big problem through the magic of dramatic irony: The only thing that can hurt him is, ironically, his own numbness.

I certainly agree that you need to have a bunch of different personal issues threading through the hero's life, but in movies they tend to all coalesce around one problem, even if only in a metaphorical "two sides of the same coin" kind of way.

In Breaking Away, the four guys all seem to have different problems, but they all ultimately realize that their problems have the same root: they've indignantly defined themselves around a false identity ("cutters") that doesn't really exist anymore, so they have to move on.

In the novel I'm currently adapting, there are many different characters with different problems ...which all have certain subtle things in common, if you think about it afterwards. As part of streamlining the narrative, I also have to subconsciously highlight those similarities a little bit more, so that the movie doesn't seem to be "all over the map", which is a criticism that is often thrown at movies but rarely at books.

Interesting point!
What abot comics and graphic novels.
Are they more like friends or strangers or acquaintances?