Storyteller’s Rulebook #58: From Zero To Caring In Sixty Seconds Flat? 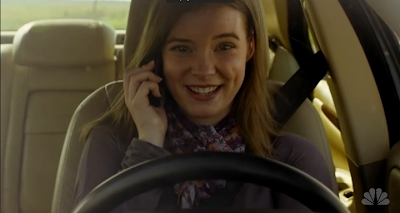 Since the start and end times of TV shows have gotten slippery recently, I always set my DVR to start a minute early and end a minute late. The result is that, in addition to the 5 shows I actually watch, I also find myself watching the last minute or first minute of 10 other shows, which can provide a fascinating study of the art of storytelling. I always ask myself the question: How well do they hook me in that first minute? Do I regret it when the screen freezes and the DVR tells me I’ve reached the end of my recording?

I’ve admitted before that my current guilty pleasure is NBC’s new event-show, called “The Event”, after which my DVR always records the first minute of NBC’s new chase-show, called “Chase”, about America’s most attractive federal marshals. The minute I saw last week showcased a certain sort of dirty trick that every author needs to know how to pull off, for better or worse.

A cute white teen girl is driving along a remote stretch of highway when she gets a call from her dad, who has big news: an envelope has arrived from Princeton. Her heart leaps up in her throat as she asks if it’s a thin envelope or a thick envelope, but she can already tell from the sound of his voice what the answer will be: a thick envelope. She’s overjoyed. Just then, she sees that a black SUV has turned on its hidden police lights behind. She tells her dad she’s being pulled over and hangs up. Looking worried, she rolls down her window and a sinister-looking man flashes a fake badge, telling her she’s under arrest for reckless driving. Just then, the screen freezes, and the DVR tells me I’ve reached the end of my recording. It’s just as well, I know that the girl is due to meet a grisly fate before the opening credits roll.

So did you see what the writer did there? This, ladies and gentlemen, is what is known in the business as a cheap trick. We meet someone whose sole purpose, in our narrative, is to get killed off. We have one minute to get to know her before she dies. This becomes a little game for the writer, a lightning-round version of what the writer does all day: make the audience care. But how can you make them care about this victim in just one minute? Simple: we find out that this girl wants something very badly (always important), then we see her get what she wants, then it all comes to naught. Four emotions: Boredom, anxiety, hope, joy, terror, all in rapid succession.

(Of course, there’s a certain cold calculus underlying these decisions as well. Supposedly, the audience doesn’t want anybody to be killed, but let’s face it, when push comes to shove, the writer knows that the average audience member will value some lives more than others. That’s why, as I’ve pointed out before, the victims on these shows are almost always cute young white women. For whatever reason, those are the people that our society has chosen to value the most. The simplest reason is that they’re the ones with the brightest future—the most to look forward to, so when they’re killed we have the sense that more value is being taken away. Alas, that’s why you’ll never see an episode of “Criminal Minds” where the killer targets old black postal workers.)

When you have time, you can build a character from scratch. You can dare the audience to like them, warts and all. But sometimes you need the viewer to go from zero-to-caring in sixty seconds flat. And you do it the same way you always do, have them want something. Anybody can make the audience say, “Don’t kill that person!” But your goal is to get them to say “Don’t kill that person!”, no matter how cheap you feel about the tricks you use to do it.