Whoops, I missed a day yesterday, so I'll have a dangling show to cover later... Oh well...


The Concept: Three hip single guys and three hip single girls hang out at a big-city drinking establishment, where they chat amiably about work and sex. Sound familiar? Yes, it was a British knockoff of “Friends”, which is why it had no business being one of the best sitcoms ever made. The problems was that they hired a writer named Steve Moffat who quickly proved to be the TV-genius of his generation. (Did you all watch “Sherlock”? Damn, that was good.)
How it Came to be Underrated: I’m stretching, since this is a beloved show, but here in the U.S. its reputation was besmirched by its big-flop American remake. 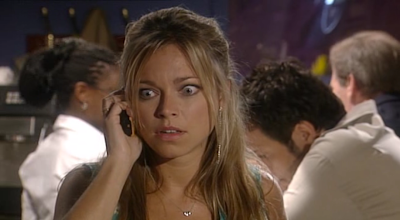 Sample Episode: 2.9, “The End of the Line”
Writer: Steven Moffat
The Story: Steve and Susan, the show’s on-again, off-again couple, have been together a year and they’re feeling the malaise of familiarity. After they find themselves flirting with the opposite sex, each attempts to call the other, only to encounter a bizarre series of quickly escalating lies on the other end of the line. As the puzzle-box of a plot unfolds, we see how a few little lies build into a big fiasco.


Why It’s Great:
What the Remake Did Wrong: This is actually pretty baffling-- NBC hired some “Friends” showrunners to reset the show in Chicago, got a pretty-good cast (it had the same talented star as a previous underrated show “Better Off Ted”), and, for the most part they re-used the original Moffat scripts word for word. So why was it so excruciatingly bad?? Literally the same scripts that made me hyperventilate in the original evoke not one single laugh in the remake. Here are some suspects:
How Available Is It?: The entire show is available to Watch Instantly, as well as on DVD. But beware the fourth season, where Coyle, the most lovable character, was replaced by a pale imitator. (The American show never even made it to DVD, and you can only find it online with Swedish subtitles burned in, which is the funniest thing about it)
But Don’t Take My Word For It:

I loved Coupling - esp. Richard Coyle: he was great in it!! (it was hard for me to find him replaced.) Great post. I did not know that there was an US remake. So thank you also for educating me! :")