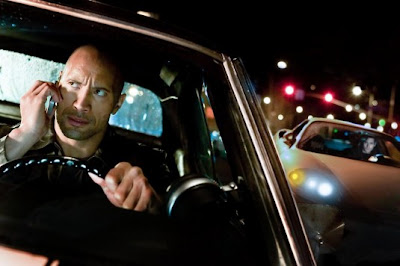 When a husband and wife are extremely like-minded, we say that they “finish each other’s sentences”. Why is this such a remarkable trait? Because it’s hard to do. But you wouldn’t know that from watching bad movies, where people do it all the time.

I’ve talked before about the quest to create pithy dialogue that’s good enough to provide a “trailer moment”. Of course, it’s possible that the movie only has six good lines, and we’ll end up complaining that “All the good lines were in the trailer,” knowing that we’ll never get our $12 back.

This is why it baffles me when even the trailer has terrible dialogue in it. There’s a trailer now for a revenge thriller called Faster. It’s got two very talented stars and you know I love my action movies, but this smells rotten, sight unseen. The trailer, which, as per usual, gives away everything, ends with a moment that’s clearly from the end of the movie, when revenge-seeker Dwayne “The Rock” Johnson has caught up to slimy villain Billy Bob Thornton. Looking beat, Thornton laments: “I created my own hell.” Johnson looms over him, growling back: “And I’m the demon that crawled up out of it.”

How many things are wrong with this exchange? We’ll overlook the first one --people don’t actually tend to converse while beating each other up-- because that’s a well-established convention of the genre. But I still can’t accept it when one character extends another character’s metaphor. Sure, I’ll buy that these characters may shout angry things at each other, but they’re not going to listen closely to the other’s figure of speech, accept that metaphor as a good way to sum up the situation, think of a way to twist that metaphor to address their own concerns, and then continue the other person’s sentence, using the same general language and tone.

When you’re confronting someone about something, and they sum up the situation metaphorically, you’re more likely to respond, “No, it’s not like that at all, asshole.” If they’re speaking figuratively, at a time like that, you’ll be all the more tempted to respond in a more literal fashion, or, perhaps, non-verbally. Alas, there’s only one language that we all speak, and that’s chin music.

You only have one brain, so it’s natural to write each line as a continuation of the previous one, using the same language and continuing the same train of thought. But your characters all have different brains, and they have no interest in finishing each other’s sentences.
Posted by Matt Bird at 11:35 PM

When your father and I finish each other's sentences, our next line is always "We've been married too long!'

We just took Alexa to see Megamind today, and near the beginning there's a clear parody of this, where the hero and villain pass the same metaphor back and forth about a dozen times within the same shared sentence.