Underrated Movie #70: Prick Up Your Ears 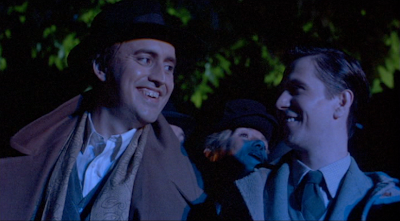 
The Story: Biographer John Lahr reconstructs the story of swinging ‘60s London playwright Joe Orton and his long-suffering lover Kenneth Halliwell, who pursue fame, danger and each other over the course of an ill-fated fifteen-year relationship.

How it Came to be Underrated: Frears turned out so many great movies in such a short amount of time in the ‘80s, and they were so unapologetically British, that America didn’t notice what he was doing until he already had a nice body of work.

If You Like This, You Should Also Check Out: Every time Oldman chews the scenery today, I try to remind myself how good he was in early efforts like this and Rosencrantz and Guildenstern are Dead. He used to be so relaxed and natural and charming!

Today’s Post Was Brought To You By: The Purple Monster Strikes! 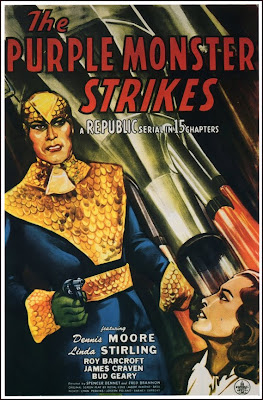 I had the good luck to see this film on its original release, (I know I am always saying that but I am old), in a Cinema called The Screen on the Green in Islington just yards away from where Joe Orton lived. You will remember that there is a very funny scene where the local librarian has finally caught Ken & Joe in their efforts to 'improve' the jackets of various library books. His assistant says that they are thought to be homosexuals, at which point the librarian says, as I remember it in an affronted tone, 'Homosexuals, Miss Brown,in Islington', as if such a thing were impossible, given the nature of the local audience that evening I have rarely heard such laughter, great film, great book, great playwright.

I didn't know Liberace was in a Republic serial.