Time for another installment of Special Guest Picks! I met Robert Lovenheim of Movie With Me through blogging and we bonded right away. He’s cross-posted some of my reviews at his blog and now he’s giving me a chance to do likewise. His blog is a smorgasbord of international cinema, so let’s visit four different continents:

Audrey Tautou is not Audrey Hepburn. This much we knew in God is Great, I’m Not (2001), and Amelie (2001). But she is fetching, sexy, and appealing enough to float like a peach melba through films like Priceless. So much better than bombing completely in dogs like A Very Long Engagement (2004).

A barman and a female hustler (Audrey) meet on the French Riviera. She’s in pursuit of a rich man who will give her everything; he’s hunting for the same in a woman. Naturally they are not meant for each other, but then again, maybe they are. Director Pierre Salvadori is the “go to” guy in France for date night romance movies, but that doesn’t mean he’s a hack. On the contrary, he’s very good at what he does and in Priceless he struts his stuff. Where he earns his euros is in stoking the jealousy and desire of each character while they go about hustling their own private gravy train between the sheets.

Finally Audrey gives up her dream of money and runs away with her euro-centless (penniless) true love. Audrey is always best as the waif. Here she’s the kind who is so confused by what she thinks she wants that she almost looses her real love when he is right in front of her. It is so much better than watching her trying on all those big hats in Coco Before Chanel (2009). We are happier with Audrey in Priceless. Which is exactly the point. For the price of a movie ticket or a DVD you can have 104 minutes of joy.

Manuel Alexandre has played roles in more films and TV shows than most small countries ever produce. He’s a serious movie actor. China Zorilla is a stage actor in comedies. Can a love story star a comedienne? Put them together and you have a pretty amazing pair, especially since China didn’t do her first film until age fifty.

78 year-old Fred, a widower, moves in across the hall from Elsa. She tells him about her life but it isn’t true. This woman wraps beautiful lies the way most people wrap Christmas presents. But she’s charming. You could put Elsa in a stalled elevator and she’d make friends with everyone in the car. What she doesn’t have is much time.

She’s suffering from-does it make a difference? It’s her secret. It’s going to kill her soon, so her fling with Fred is the last round. She leads him through adventures only a daring twenty-year old would try. My favorite is ordering a meal at the most expensive restaurant in town and then bolting the check. Who would suspect a grandma and grandpa doing their arthritic walk for the door were actually running for it?

Elsa has one last wish to top them all. She wants to go to Rome and jump in the Trevi fountain, just like Anita Ekberg did in La Dolce Vita (she was likened to Ekberg when she was young). The life force of Elsa’s character makes this movie. When Fred finally meets her ex-husband who she claimed was dead, he asks if he would do it again, given all he went through with her. The husband doesn’t hesitate. He says it was a wonderful ride, and she is an original. So is Elsa & Fred. 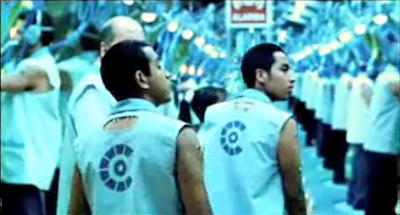 Sleep Dealer (Mexico 2008, 90 min. dir: Alex Rivera, cast: Luz Martinez, Jacob Vargas, Luis Fernando Pena
Cheap Mexican labor does the work we won’t, but in this futuristic vision we’ve figured out how to use them without ever letting them across the border. Alex Rivera’s ingenious “what if” movie shows a world that is the inheritor of H.G. Wells, “The Time Machine.” In that famous novel, humanity is divided between carefree people who live on the surface of the earth and busy themselves with frivolities; and the lowly workers who live below in lightless caverns. The Morlocks below, churn out the food and materials that allow the Eloi, above, to be carefree. Only problem: the Morlocks often snuck above at night and ate the Eloi.
Anyone who lives near the Mexican border knows about maquiladores. These are the sweatshop factories built on the other side (the dark side) near border cities. Low-paid Mexicans churn out toasters and table chairs for Wal-Mart. It’s all perfectly legal under the NAFTA treaty. They work for us but we don’t let them in.
Sleep Dealer has gone a step further. Mexicans who want to work are first fitted with metal receptors pierced into their flesh. They can then go to work in giant factories fitted with probes that fit the receptors. Once hooked up and wearing special vision goggles, they find themselves manipulating their arms and legs to control robots up in the US that do anything from baby sitting to picking fruit to working heavy construction.
The perfect solution to immigration! Import only the robots and let the drugged out, sleep deprived Mexicans do the hard labor so they can pay our giant corporations for their water, electricity, and food. Sleep Dealer is a small movie that has a lot to say, and what it says is so condemning that it is amazing so few have seen or listened. 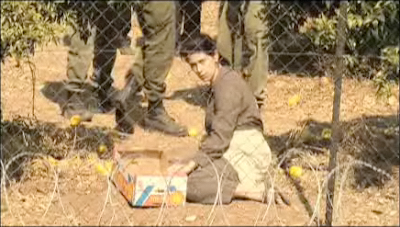 If you’ve seen recent Israeli movies, you know Israel has already lost the war. Art usually precedes events. A nation that walls off its enemy while reserving the right to invade at will is blind: even with night vision goggles. Anything said of the Israelis can apply to us. Iraq, Afghanistan, and Viet Nam are not yet finished. At some point our guns will not protect us.

Lemon Tree is a simple tale about a backyard fence erected in the name of security. Nobody dies, nobody goes to prison. But nobody who puts up the fence thinks of the human cost. The human cost is what new Israeli films are about. Waltz with Bashir, also on MovieWithMe.com, is a complex narrative about Israeli sanctioned slaughter. Here as well, the human cost-not only to the enemy but to the Israeli soldiers: is never factored in. Films like these speak to moral fractures that can only widen.

In Lemon Tree, the new Israeli Defense Minister decides to build his dream country house right on the border with West Bank Palestine (a little improbably, but what the hell). His neighbor across the wire is a Palestinian woman who has been tending the lemon grove that was planted by her father. The minister’s security men decide the lemon grove offers potential cover to terrorist encroachment, and must be cut down. They offer to compensate the woman, but she doesn’t want the money, she wants her land and her lemons.

A young Palestinian lawyer takes her case and argues all the way to the Israeli Supreme Court. He achieves a partial victory: they will cut down the trees near the border fence, and leave some of the ones farther away. It doesn’t help, and the person who seems to understand her plight, and her powerlessness the most; is the wife of the Defense Minister. They eye each other across the backyard border throughout the movie, yet meet only once, briefly, in court. Their eyes seem to ask: is this the only way we can live, do we actually understand each other better than we know?

In their rush to seal the border against all threats are the Israelis never pausing to see their enemy is also human? Regardless of your feelings on the politics, the performance of the Palestinian woman and her lawyer are so rich and subtle that the film is always engaging and human. Haim Abbas carries the weight of the Palestinian people in her eyes.

Robert Lovenheim is a longtime movie producer turned internet entrepreneur. There's a lot more at Robert's ambitious website, Movie With Me, which has has a ton of cool content in addition to his blog.

Thank you a bunch for sharing this with all folks you actually recognize what you are speaking approximately! Bookmarked. Kindly additionally visit my website =). We may have a hyperlink alternate contract between us! seo search engine marketing