Rulebook Casefile: The Masterful Weave of The Sopranos Pilot 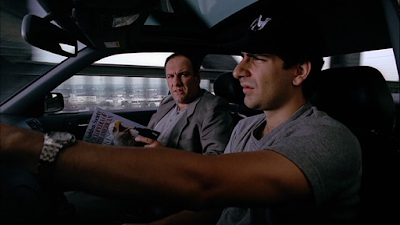 One of the hardest parts of television writing is “The Weave”. You not only have to come up with several excellent storylines that each have their own beginning, middle and end, but all of those storylines need to fit into the same timeline and interweave in a seamless and satisfying way. The “Sopranos” pilot, has an especially hard job to do, because it’s a full hour and weaves together seven different storylines. It does a fantastic job. Taste the Rainbow!

The Storylines:
How They Weave:
As you can see, there are rarely two scenes in a row from the same storyline, and several scenes contain more than one storyline. So how does Chase keep it from seemingly totally disjointed?

In some cases, he finds clever ways to jump from storyline to storyline: In the first Christopher scene he’s still reading his duck book. Later, the HMO guy says that he’s taking Zoloft for his gambling problem, then we cut to Tony taking his Prozac as Artie drives up to return the cruise tickets. After that, Tony talks about his penis being taken away, then we start the next scene with him frying sausages on a grill.

Next time, we’ll look at another way the first half is tied together: the framing sequence.
Posted by Matt Bird at 6:54 PM

Along with THE FIGHTER, now you've gone and made me realize I need to rewatch this again ASAP. Darn you!

Also, apropos of nothing, I think you and others should really check out the unexpectedly great GOOD KILL, the film the drone war deserves and far and away the best thing Andrew Niccol has ever been involved with. And I've finally seen David Hare's Worricker trilogy, which was also better than I expected. And I've started watching THE SANDBAGGERS, which you were totally right about. Easily the ugliest looking TV show I've seen that's nonetheless still so engaging you can't take your eyes off it.

I should check out GOOD KILL, and I'd never even heard of the WORRICKER trilogy, but that looks good too. While we're talking about longstanding recommendations, I finally saw MEMORIES OF MURDER, which was amazing. David Fincher owes that guy a royalty check.

I have just installed iStripper, and now I can watch the sexiest virtual strippers on my taskbar.